Another reason the Flood could not have been local

About 1656 years after the creation of the world, God destroyed all humans, except for eight1 on the Ark that Noah built, and all air-breathing land animals (except those on the Ark) in a great global judgment. Many marine creatures were also destroyed—some 95% of all fossils found are the remains or impressions of creatures who once lived in the sea. We see evidence of this deluge all over the earth, including on the highest mountains. Mt Everest has marine fossils at its peak. 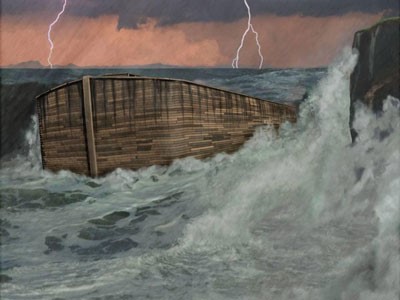 “… when once the long-suffering of God waited in the days of Noah, an ark having been prepared, into which a few, that is, eight souls, were saved through water. Which antitype now also saves us, baptism (not a putting away of the filth of the flesh, but the answer of a good conscience toward God through the resurrection of Jesus Christ … .)” (1 Peter 3:20–21, KJ3).2

The Apostle Peter describes our being baptized into Christ’s death as an antitype of the saving of eight in the Ark. The original Greek word ἀντίτυπον (antitypon) has the meaning of a ‘representative’ or a ‘figure’. The dictionary definition of the English word ‘antitype’ is ‘something that is represented by a symbol’.  It comes from ‘anti’ meaning ‘opposite’, as well as ‘in place of’, and ‘typon’ an impression like from a die or stamp. So an opposite to the die is a representation or symbol of the original. In short, the Bible makes it clear that the Ark, which saved eight souls through the deluge, is a figure, or ‘type’, of Christ and His salvation. Through entering the Ark, all who responded to Noah’s preaching could be saved from the waters of judgment. Even so, by entering into Christ, the ultimate Ark of salvation, we are saved from the judgment to come.