This article is reposted from RT.com. It is a November 23rd, 2015, article titled Europe’s moral and spiritual vacuum invites acts of terrorism by Iben Thranholm a Danish journalist who examines political and social events with focus on their religious aspects, significance and moral implications. She is one of Denmark’s most widely read columnists on such matters.

These days the media are overflowing with comments and analyses of last Friday’s terrorist attacks in Paris. One particular angle is consistently ignored – or banished: religion.

This is a curious omission since the terrorists themselves issue statements that indicate that religion is their motivation.

The statement in which IS accepts responsibility for the attacks in Paris is made in the name of Allah and the killings are referred to as “a blessed battle whose causes of success were enabled by Allah”. It states that Paris was targeted because it is “a capital of prostitution and vice” and “the lead carrier of the cross in Europe.” 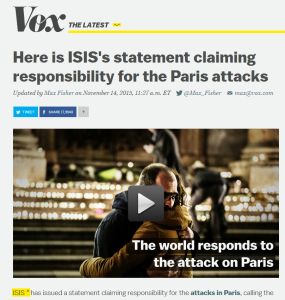 IS is consistently referring to the Parisians as “crusaders” – the audience at the Bataclan, however, are called “pagans gathered for a concert of prostitution and vice.” The statement closes with a terror threat to strike those who “dare to curse the Prophet and boasts about their war against Islam”.

A further look at the character of the attacks reveals with ever-increasing clarity their symbolic significance. They were carried out on a Friday, the Muslim holiday. The victims at the Bataclan were listening to music, which is banned in fundamentalistic Islam, and the first targets to be shot were guests at the bar drinking alcohol. The symbolism assumed a new dimension when the perpetrators started firing on the audience of a performance by the band ‘Eagles of Death Metal’ of its popular tune “Kiss the Devil”.

A series of images taken moments before the massacre started, members of the audience are seen making the hand sign used for devil worship, their index and little finger lifted in preparation for singing along with the lurid lyrics:

What diabolical irony: the audience in the concert hall sings to the devil and is then butchered in cold blood by Jihadists claiming to serve Allah by annihilating pagans celebrating and invoking the Devil.

The Parisians seem devoid of any sense of the spiritual reality they are inviting. Yet their invocation was heard and answered. What a heart-breaking scene. Servants of Allah and pagan revelers becoming a devilish blood sacrifice. (my emphasis added)

In spite of IS’ own constant and unambiguous references to Allah as the motivation for their terrorist acts, politicians and mass media alike consistently refuse to acknowledge religion, let alone mention it.

Instead, they contort their rhetoric into fantastical figures of unreality by stressing that the world is not at war with Islam, supported by claims that IS/ISIS/ISIL is not Islamic, and for this purpose they have adopted the new brand name Daesh, ostensibly to express denial of Islamism as a religious faith.

When Francois Hollande spoke at the Congress at the Versailles shortly after the attacks, he refused to link the atrocities with Islam with even a single word. Obama has also said time and again that the West is not at war with Islam.

Religion is thus a total taboo in the narrative of the fight on terror. There are two reasons. One is political correctness: the ideology of secularism propounds the doctrine that religion is irrelevant, as it is not one of the ideals of the Enlightenment and must therefore be ignored, except in so far as it is made the object of derision ad scorn. The other, and more significant, reason is that there is little sensibility to religion and spirituality in Europe – and none whatever among the political elite.

This is the root of the problem.

Irrespective of the way one chooses to interpret the desire of the jihadists to strike “pagans gathered for a concert of prostitution and vice” and the audience’s invocation of the devil, it provides a strong picture, or perhaps rather a sign, of what creates and nurtures terrorism. The driving force is spiritual rather than political.

The decline of Christianity in the West has created a spiritual and moral vacuum of colossal proportions. It is this vacuum that gives Islamism momentum and nourishment. (my emphasis added)

The West simply no longer understands spirituality and has lost touch with its spiritual foundations by abandoning Christianity, now banished also from the EU Treaty. Several countries have removed Christian and all religious symbols from public spaces. By removing God they have created an empty space for evil to fill. This has been combined with morally bankrupt foreign policies that have accepted the slaughter and beheading of Christians, which is tantamount to a destruction of Europe’s own spiritual foundations to achieve geopolitical gains, the latest of which is regime change in Syria by removing the country’s democratically elected president.

The monster created by the rejection of Christianity is gaining power, as terrorism has grown from a de-christianized culture. Secularism and Islamism are two faces of the same destructive spirituality, two parasites nurturing each other. While justice and mercy combine in the virtues that spring from Christianity, the destructive justice of Islamism becomes glaringly demonic. There is no longer a spiritual counterweight of grace, forgiveness and charity, only a political counterpoint, which is clearly inadequate.

Secularism, relativism of values, materialism and democracy as a new religion (idolatry devoid of a deity) constantly prove their feeble inadequacy when facing Islamism. The post-Christian ideologies possess no core of spiritual strength – surveillance and military hardware is what they offer. It takes more to win a war. It takes moral strength. The West has lost its moral strength, amply evident in its approach to foreign policy by supporting so-called moderate terrorist groups that show little moderation when it comes to beheadings and literally eating the hearts of their victims. (my emphasis added)

Unless Europe acknowledges the religious pivot of terrorism, Europe will perish clueless of the identity of its real enemy. Europe will remain fatally feeble. A spiritual revival is the single and sole hope for Europe to muster the strength to stand up to IS. The spiritual vacuum is also a vacuum of true values: patriotism, honor, virile virtues, masculine values like valor, courage, self-sacrifice, and strong faith in a good and loving God. All this is urgently needed if Europe is to defeat terrorism and radical Islam.

Such a spiritual revival, a resurgence of Christianity, has been sweeping through Russia after the end of the Cold War. This provides Russia with a much clearer sense of what it takes to defeat terror and evil: the correct calibration of the moral compass, which allows you to know where you are and where you need to go.

Europe has prevailed against Islam several times through history. It did so in Spain, France, in Austria in the Battle of Lepanto in 1571, and all of these victories were won at a time when Christianity was the explicit and acknowledged foundation. Now, for the first time in history, Europe must face Islam in mortal battle without the rock of Christianity to provide the foundation to stand on and without identifying the enemy, and without admitting it is at war. No compass to show where it is, where it should go, or why.

If Europe is to win this battle, it must rediscover Christianity. French Foreign Minister and founder of the EU Robert Schumann once made the statement: “Europe will not live and will not be saved except to the degree in which it has awareness of itself and of its responsibilities, when it returns to the Christian principles of solidarity and fraternity”.

If Europe persists in rejecting Christianity, it must abandon all hope of ever being able to stand up to Islam and its Islamic terrorism.

One reply on “Cancer in our society VI: Europe’s moral and spiritual vacuum invites acts of terrorism”

John, I like your blog entry today. It explains very well why the West is experiencing increased terrorist attacks. We have created a moral and spiritual vacuum for the terrorists to fill. We are challenged in how to fill this vacuum and defend ourselves.

I just read this latest weekly newsletter from John Mauldin in which Charles Gave, born in Syria 72 years ago, explains why there is such an enormous migration of minorities out of the Middle East into Europe and other countries. You might find this edition of the newsletter interesting. http://ggc-mauldin-images.s3.amazonaws.com/uploads/pdf/151127_TFTF.pdf The confluence of the two trends are likely to lead to great social upheavals in the near future.