Over the past two months I have read a few excellent books, which I recommend to you. Of the three, my top choice read is Jerry 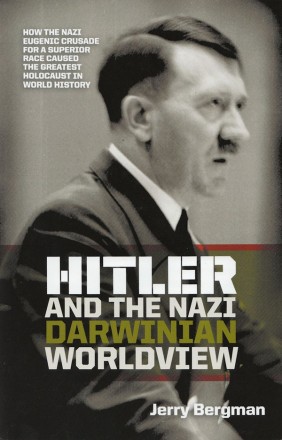 How the Nazi eugenic crusade for a superior race caused the greatest Holocaust in world history.

This book takes a fresh look at Germany’s most influential Nazi leaders, examining their backgrounds, education and convictions. It provides compelling evidence that the rising influence of Darwinism, eugenics and race theory in early twentieth-century society set the foundation for the Nazi pursuit of engineering a German “master race”—and exterminating European Jews, Gypsies, Blacks, most Slavs and the Christian religion in the ensuing madness of the Holocaust of World War II.

The effect of social Darwinism, eugenics and anti-Semitism, and their relative acceptance in the scientific and medical communities of Germany and many other countries worldwide, opened the door to mass murder, medical experimentation and military conquest. This title examines the roots of Nazi ideology and unmasks the Darwinian “survival of the fittest” theory behind it.

A review is found here

For a long time there has been speculation about Adolf Hitler’s alleged Jewish ancestry. On page 53 Bergman writes in regards to this:

Genetic research indicates the possibility that Hitler had Jewish background, which makes his inferiority concerns somewhat ironic. … Geneticists identified groups of genes called haplogroups that define populations. Hitler’s dominant haplogroup, E1b1b, is relatively rare in Western Europe, but between 50 to 80 per cent of North Africans share Hitler’s dominant group, which is especially prevalent among in (sic) the Berber tribes of Morocco, Algeria, Tunisia and Somalia. Hitler’s second most dominant haplogroup is the most common in Ashkenazi Jews.  “The findings are fascinating if you look at them in terms of the Nazi worldview, which ascribed such an extreme priority to notions of blood and race. This pure type of ‘superman’ and the [Nazi] breeding programs to perfect ‘purity’ were sheer fabrications.” (The author cites Haaretz Service, “DNA test reveal Hitler’s Jewish and African roots,” Jewish World (August 4, 2010): 1.) (emphasis added)