This is the final part of a 3 part study. Part I and Part II are found here. I ended the last study of this chapter (in part II) with verse 10.

2 Peter 3:10 But the day of the Lord will come as a thief in the night; in the which the heavens shall pass away with a great noise, and the elements shall melt with fervent heat, the earth also and the works that are therein shall be burned up.

It is worth repeating here that I do not believe that the phrase “the heavens shall pass away” describes the destruction of the starry heavens (all the stars and galaxies in the cosmos), but instead, at most, it describes a renovation of the earth and its atmospheric heavens, at the time Christ returns in judgment and to govern the earth. Read Do the heavens literally pass away or don’t they? and Scientific evidences in the Bible: Information or misinformation?

It seems to be the eschatological position of many biblical creationists that this verse means the destruction of the entire known Universe and that all the heavenly bodies will all be burned up in the final judgment. Then God will re-create an entirely new universe. However the destruction of the starry heavens I argue (as put here) is not necessarily required by the texts. Certainly a new heaven and new earth must mean God re-creates the environment of Earth and brings His heavenly city into the picture, providing real physical heavenly mansions for us all who believe. But that re-creation need not extend beyond our solar system. This is further evidenced by the idea that the Universe may be, in fact, eternal. God introduces His sustaining power to maintain it forever. Thus is not the result of an eternal big bang universe that had no Creator, not the result of the quantum fluctuation of a meta-stable false vacuum, but an eternal Universe sustained by the Creator Himself. So at some stage God reverses entropic decay in the Universe and maintains it forever. 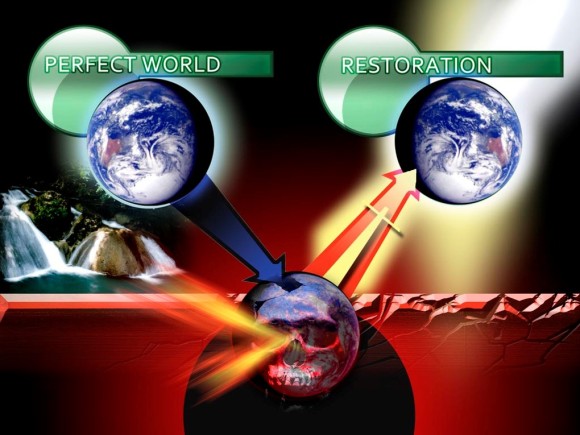 The concept of literal restoration of the perfect creation on Earth and its environment is not incompatible with the biblical creationist message that is illustrated in the figure above. God initially literally created a perfect physical world/universe sustained by His power. But at Adam’s sin God cursed the creation bringing about various difficulties (to say the least) upon mankind and all living species on the planet. The greatest of these difficulties was death, spiritual death followed by physical death.

The death of humans and all living sentient beings has little bearing on the “life cycle” of stars and galaxies, which are little more than an arrangement of hot gases. So it is ill-advised to speak of the death of stars resulting from the Curse. Thus to suggest that supernovae only occurred post-Fall is grossly in error. They are the result of normal operational physics and I believe have little bearing on, or relation to, man’s actions. Whereas the Fall was the direct result of a man’s action to disobey the Living God. As a result we all inherited Adam’s sin. And thus we are in need of a Saviour.

The Universe though is a creation of God, for His own glory (Psalm 19:1). We have evidence in the scriptures supporting the idea that God will maintain the Universe (the Sun, moon and stars) forever. Psalms 148:3-6 and 89:37.