Do you know the meaning of this Chinese word? 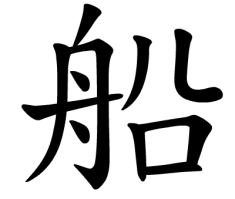 It translates to ‘boat’ in English.  Chinese characters, ideograms, can be formed from radicals which themselves are pictograms, which have their own individual meanings. The characters forming the word ‘boat’ are as follows:1,2

END_OF_DOCUMENT_TOKEN_TO_BE_REPLACED

This is my response after reading an online article about the purported discovery of dark matter:

A theorist has an idea about the mixing (coupling) of dark matter axions with normal matter through an S/N/S junction. Firstly, the axion is a theorized particle in the WIMP (Weakly Interacting Massive Particle) category but this expected particle with a mass of 1 μeV is in the WISP (Weakly Interacting Slim Particle) category. The latter is what I have been searching for in a lab experiment—a 53 μeV mass paraphoton—for four years.1  In all these type of experimental searches, these types of putative particles cannot be directly observed but only by their expected effects on normal matter and radiation sectors. So a theorist calculates the magnitude of the mixing parameter (nowadays < 10-8, or much lower) and they run experiments to put an upper limit on it. So if you get a signal­—instead of just noise—the signal is from real normal type radiation, thus you have to exclude all possible spurious signals, and usually the detection expected is extremely small so it becomes extremely problematic to definitively say—even if you had an unknown signal—that you have made a detection.

END_OF_DOCUMENT_TOKEN_TO_BE_REPLACED

1) Where did the Universe come from?

Man puts all his faith in cosmology to answer this fundamental question. But cosmology is not even science, it is just philosophy. This has meant that man has had to invent fudge factors to make his theories work, such as the totally-just-made-up stuff called Dark Energy, Dark Matter, and Inflation. There isn’t a shred of any real laboratory evidence for any of them. Not any! They also claim the Cosmic Microwave Background radiation as the afterglow of the Big Bang, thus supposed to be coming from all directions. Yet it seems to be associated with the orbital plane of our solar system’s planets! But that makes no sense at all!

END_OF_DOCUMENT_TOKEN_TO_BE_REPLACED

You get up in the morning and go to work or school. But everywhere around you screams “there is no ultimate reason” to do so.

The universe began in some random explosion, from the quantum fluctuation of nothing, some Big Bang we are told.  Over billions of years stars formed and exploded building the elements (C, N, O etc) that all plants and animals are made from, we are told. We are just reorganized star dust, they say.

It is said that man is just the product of millions, even billions, of years of evolution, the most recent stage in some unguided evolutionary process.  Finally man evolved from some past ape-like ancestors several million years ago, so we are told.

“There is no doubt now; no serious scientist has any doubt that evolution is a fact, in the sense that we are cousins of chimpanzees, monkeys and wombats and cassowaries.”