Science has become the new religion. Those who dare challenge the dictates of ‘science’ are often declared crackpots, pseudo-scientists or just plain crazy. If you deny or doubt evolution, or anthropogenic global warming (AGW), now called ‘climate change’, or the effectiveness or safety of certain vaccines, or the universal safety of genetically modified foods, as compared with natural breeding and hybridization practices, you are called nasty names. These might include ‘flat-earther’, particularly if you deny Darwinian evolution.1

It has come to a point now that to be called a ‘creationist’ is a big negative, like you are a pseudo-scientist, or follower of astrology, or witch doctors, etc. Such a person is thinking irrationally and cannot be trusted according to the new paradigm.

Then there are those who are called some sort of ‘climate change denier’, who must be funded by ‘big oil’, as though they must have a corrupt vested interest or be just plain crazy. As a physicist I have analyzed the global temperature data, spanning the last 100 years, downloaded from the Met Office Hadley Centre.2 I have no vested interest here, but I find that a continued warming trend is not supported by the data. But I remain skeptical. The main problem I see is the limitation of human time scales and the lack of any really robust model that successfully predicts developing trends.3

END_OF_DOCUMENT_TOKEN_TO_BE_REPLACED

Someone writes a book, or develops a theory (or even just presents some speculation), and then a believer in a church uses that information and says something like,

“The YEC position is true and here’s the proof! You are crazy if you can’t believe it because we have this evidence.”

Sadly, sometimes I hear this sort of thing.  Folks it just should not happen. And a person who hears it might react, complaining with,

“A (creation ministry) speaker filled their heads with stuff, which isn’t true about the YEC interpretation of the Bible.”

Well that’s how the recipient may have understood the attack on his belief system, which was obviously not a biblical creationist one. Maybe he believes in theistic evolution or big bang or both. (I am not supporting those inconsistent interpretations, but I am talking about our approach.) This sort of thing has led to a division in the fellowship. Some even claim that the whole subject of biblical creation is divisive. That is not what I am talking about, but rather how some well-meaning people use speculations and theories like clubs trying to win an argument, when they should be categorized only as man’s attempts at a solution to a biblical creationist problem.

END_OF_DOCUMENT_TOKEN_TO_BE_REPLACED 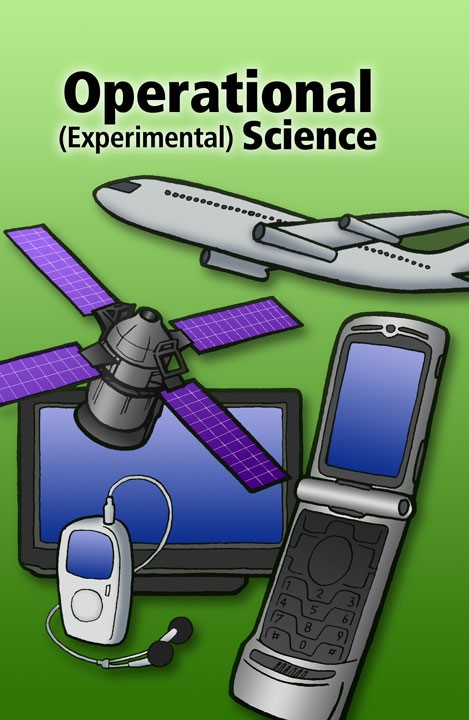 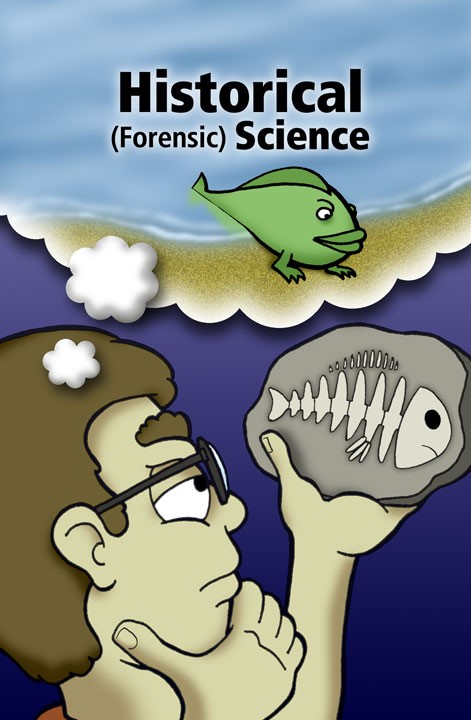 Most scientists themselves do not understand the distinction. They often are too close to the subject to realise.

When a forensic scientist enters a crime scene he collects evidence. These are, for example, bodily fluids, tissue samples, fingerprints, paint scrapings, etc. He goes to his lab and uses sophisticated machines to determine the DNA of the victim or perpetrator, or scan for a fingerprint match in a data base, etc. That is repeatable science, hence operational science.

END_OF_DOCUMENT_TOKEN_TO_BE_REPLACED

I just watched this documentary. It is powerful. Buy it! You won’t be disappointed!

The movie has been available since October 20th 2015. Order it now. More Information

Creation Ministries International (CMI) undertook a major new offensive to take even more ground in the battle to proclaim the truth of the Bible. The aim was to simply and concisely expose evolution’s fatal weaknesses.

It culminated in 2014 with the completion of a milestone book, and a 96-minute DVD documentary, both called Evolution’s Achilles’ Heels.

The Achilles’ heels of evolution are often in the very areas widely considered to be impregnable strongholds of this belief system. These areas are the topics systematically covered in both the book and the documentary. They are:

We believe evolution theory has no answer to these weaknesses, once properly explained and understood. The book is like no other work that we are aware of, in that it is authored exclusively by nine Ph.D. scientists, including myself, to produce a coordinated, coherent, powerful argument. The documentary involves even more PhD scientists, 15 in all, and features striking footage and brilliant computer animations. All of these scientists received their doctorates from similar, secular universities as their evolutionary counterparts. Each is a specialist in various relevant fields.

END_OF_DOCUMENT_TOKEN_TO_BE_REPLACED

How did the universe begin, and how and when was everything in it created and formed? That is probably the most fundamental question of all. Here I compare two cosmogonies (the study of the origin of the universe).

Jesus was speaking to his disciples when He said,

46 And why call ye me, Lord, Lord, and do not the things which I say? 47 Whosoever cometh to me, and heareth my sayings, and doeth them, I will shew you to whom he is like: 48 He is like a man which built an house, and digged deep, and laid the foundation on a rock: and when the flood arose, the stream beat vehemently upon that house, and could not shake it: for it was founded upon a rock. 49 But he that heareth, and doeth not, is like a man that without a foundation built an house upon the earth; against which the stream did beat vehemently, and immediately it fell; and the ruin of that house was great.   Luke 6:46-49

I was reading these verses a few days ago and something struck me about this. It reminded me of the state of the Christian church today. 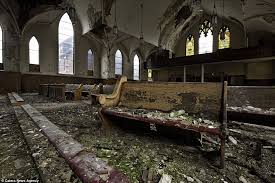 Jesus questions. Why call Him Lord and not do what He says? Why say you believe but in practice you don’t?

END_OF_DOCUMENT_TOKEN_TO_BE_REPLACED

This has been a long time in the making! This powerful book exposes the fatal flaws of evolutionary thinking. Like no other work that I am aware of, it is authored by nine Ph.D. scientists, including myself, to produce a coordinated, coherent, powerful argument. All of the authors received their doctorates from similar secular universities as their evolutionary counterparts. Each is a specialist in a field relevant to the subject written about: Natural selection, origin of life, geology, genetics, radiometric dating, the fossil record, cosmology, and ethics.

Evolution’s Achilles’ Heels directly demolishes the very pillars of the belief system that underpins our now-secular culture—evolutionary naturalism. It’s coupled with the Biblical command to reach the lost with the Bible’s Good News. In a nutshell, it’s a comprehensive outreach tool like no other. Get a copy today. You won’t be disappointed.

More information at A major book and DVD documentary project

The word ‘Nephilim’ is found in the Old Testament Bible and some have suggested that their existence before the global Flood in Noah’s day was the reason God sent it to destroy all air-breathing life (nephesh chayyah) on the surface of the Earth. Certainly there is both biblical and archaeological evidence that giants, giant-sized people, have existed, but was there really ever a Nephilim problem? Could it be that that was at least part of the reason God sent the Flood?

The word Nephilim is derived from the Hebrew word נְפִיל/נְפִל nphiyl (nef-eel’), which appears in Genesis 6:4;

There were giants [nphiylim] in the earth in those days; and also after that, when the sons of God came in unto the daughters of men, and they bare children to them, the same became mighty men which were of old, men of renown. KJB (= King James Bible)

Various versions translate this as ‘giants,’ or not at all, leaving the untranslated Hebrew word, where the ending ‘im’ indicates it is plural;

The Nephilim#  were on the earth in those days, and also afterward, when the sons of God came in to the daughters of man and they bore children to them. These were the mighty men who were of old, the men of renown.  ESV (=English Standard Version)  ESV endnote #: giants.

END_OF_DOCUMENT_TOKEN_TO_BE_REPLACED

On Friday June 6th, I presented a lecture at the University of Adelaide entitled “8 Reasons Why Evolution is Foolish” to an audience of about 55, filling about half of the seating in a small lecture theatre. I spoke on the topic for about 60 minutes presenting my 8 reasons via 8 questions which, so far, have not been answered by evolutionists. Following the lecture we had about 40 minutes of Q&A. The video of the lecture is here. 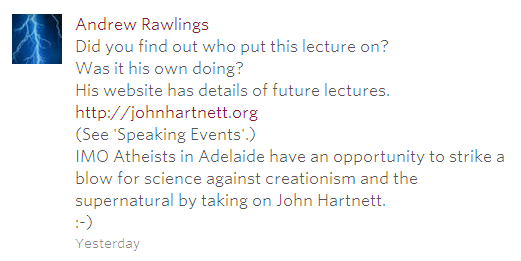 An organised group of atheists turned out to “strike a blow for science against creationism and the supernatural” by taking me on. That is what they claimed on their website.1 See left excerpt.

There were about 10 members of some atheist club, who peppered themselves through the audience. After the event one guy identified himself as president of some atheist club, so it is clear they came with an action plan. I had been forewarned that something like this might happen as one contact told me that there had been a lot of activity on a university-connected FB page about this event. But their arguments and the questions they put to me in the Q&A were a total failure.

END_OF_DOCUMENT_TOKEN_TO_BE_REPLACED

The Apostle Paul warned the young disciple Timothy to stay diligent to study and understand the Word of God and not to be deluded by the heresies in the day he lived.

O Timothy, keep that which is committed to thy trust, avoiding profane and vain babblings, and oppositions of science falsely so called: Which some professing have erred concerning the faith. Grace be with thee. Amen. 1 Timothy 6:20,21

The word translated ‘science’ here is γνῶσις gnosis in the Greek text. It means knowing or knowledge. The warning is against that false knowledge—gnosticism.  Gnosticism was the predominant source of heresy when the New Testament was written.