Late in 1973 I finished my B.Sc. honours degree in physics at the University of Western Australia. After that I was not so sure what I should do. However, that summer (Nov-Dec 1973) I visited my Catholic girlfriend out in the country (which Australians call the Outback) on an aboriginal mission where she was working. I think she could not fully comprehend what was going on in my mind, though she was happy I was no longer an atheist but had become a Catholic. (We were engaged to be married when her service ended.) I grew to understand later that her service to God was some religious duty instilled in her by Catholic parents and the Roman Catholic Church, and not as a result of a new heart from a ‘rebirth in Christ’.

At that time, while working out there, I met a Christian guy who told me about David Wilkerson and his work amongst the New York gangs and drug addicts, where many were miraculously delivered from drug addiction and violence through Christ. David Wilkerson was (now gone on to be with the Lord) a born-again Christian pastor who trusted God for miracles to change the lives of many young people on drugs through the miraculous power of the Holy Spirit. END_OF_DOCUMENT_TOKEN_TO_BE_REPLACED

A parable for the compromised church

Jesus was speaking to his disciples when He said,

46 And why call ye me, Lord, Lord, and do not the things which I say? 47 Whosoever cometh to me, and heareth my sayings, and doeth them, I will shew you to whom he is like: 48 He is like a man which built an house, and digged deep, and laid the foundation on a rock: and when the flood arose, the stream beat vehemently upon that house, and could not shake it: for it was founded upon a rock. 49 But he that heareth, and doeth not, is like a man that without a foundation built an house upon the earth; against which the stream did beat vehemently, and immediately it fell; and the ruin of that house was great.   Luke 6:46-49

I was reading these verses a few days ago and something struck me about this. It reminded me of the state of the Christian church today.

Jesus questions. Why call Him Lord and not do what He says? Why say you believe but in practice you don’t? END_OF_DOCUMENT_TOKEN_TO_BE_REPLACED

Is there definitive evidence for an expanding universe?

Evolution out of the ‘Dark Ages’

Expansion of the universe is fundamental to the big bang cosmology. No expansion means no big bang. By projecting cosmological expansion backwards in time, they assert, one will, hypothetically, come to a time where all points are the same. Since these points are all there is, then it logically follows that there is no space or time ‘before’ this moment. It is the singularity, and we cannot use language couched in concepts of time when no time (or space) exists.

Yet there are Christians who use this presumed fact as evidence in support of the Genesis 1 account and even for the existence of God Himself. They argue that only God could have started the big bang. Though it is true the universe does need a first cause it is an enormous leap into the unknown to suppose that the big bang story is that which is described in the Genesis 1 narrative. The sequence of events is nothing like it. See The big bang is not a Reason to Believe!

Redshifted The spectral lines for this element still show the same distinctive pattern, but all have been shifted towards the red end of the spectrum.

At the end of the 1920s, Edwin Hubble made a significant discovery. He found a proportionality between the amount by which the spectral lines in the light coming from relatively nearby galaxies are redshifted1 (z) and their distances (r) from Earth. That relationship is now called the Hubble law c z = H0 r, where c is the speed of light and H0 is Hubble’s famous constant of proportionality.

The Hubble law has since been extended to very great redshifts (therefore by inference, distances) in the cosmos, via the redshift-distance relationship. At small redshifts, and by interpretation at small distances, this becomes precisely the Hubble law.

Redshifts have been interpreted as a velocity of recession, i.e. that galaxies are moving through space. And that the recession implies expansion of the universe. But Hubble, up to the time of his death, was not so convinced of this interpretation.  He was open to the possibility that there could be another mechanism to explain redshifts. END_OF_DOCUMENT_TOKEN_TO_BE_REPLACED

Christian Palestinianism: Replacement theology of the One World religion

Paul Wilkerson, at the 2011 The Berean Call Conference, exposes the diabolical ecumenical re-writing of God’s promise to His chosen people the Jews. It seems to be led by the Roman Catholics, with so-called evangelical Christians in bed with Islamic terrorists. Endorsed by Brian McLaren, the apostate from the New Apostolic Reformation (NAR) (which teaches a political church on Earth). The agenda is one world, anti-Christ, Roman Catholic, anti-Semitic, socialist, communist, Islamist, devilish.

But the Lord says,

Thus says the LORD, which gives the sun for a light by day, and the ordinances of the moon and of the stars for a light by night, which divides the sea when the waves thereof roar; The LORD of hosts is his name:  If those ordinances depart from before me, says the LORD, then the seed of Israel also shall cease from being a nation before Me for ever.  Jeremiah 31:35,36

The sun, the moon and the stars will fail before God disinherits Israel.

The Lord will overcome 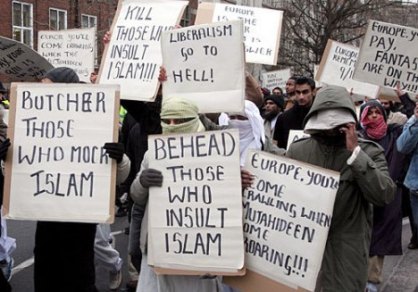 I see this as the Lord’s doing, the same way He sent the Babylonians to carry away Israel into captivity (Jeremiah 29:1-14) or the way He used the Assyrians (Isaiah 10:5)  to chastise Israel for her sins. This time the chastisement is to the Christian Church (spiritually Israel) and again to the chosen people, the Jews, wherever they may be. I believe the Lord  Jesus will come again and restore His assembly of believers, whether they be Jews or Gentiles. And the Lord will Himself judge those who disobey His laws and murder innocent people. END_OF_DOCUMENT_TOKEN_TO_BE_REPLACED

Tension not extension in creation cosmology

For a considerable period of time modern biblical creationists as well as non-biblical creationists, like the progressive creationists (with an old earth/big bang embracing worldview) have used many biblical texts to argue that Scripture supports cosmological expansion of the universe. In 2011 I reviewed those texts.1  What I found was that to suggest that they describe cosmological expansion of space, with galaxies being spread out in space using the often-quoted rubber-sheet analogy, is not justifiable and is pure eisegesis.  The straightforward meaning is that of God constructing the heavens above and the earth below as a description of His preparation of a habitat for man. The metaphors used are of putting up a tent or canopy, which does not stretch like a rubber sheet.

Even though the texts do not rule out the notion of cosmological expansion, because they are silent on the matter, they do not explicitly describe it. Therefore I believe if we

We may not in our lifetimes discover exactly how He created the universe, but it is also true that if we are not faithful to His Word we may never find that truth we seek.

“He hath made every thing beautiful in his time: also he hath set the world in their heart, so that no man can find out the work that God maketh from the beginning to the end.”  Ecclesiastes 3:11

Recently I received an email from Russ Humphreys in regards to this matter as it had been discussed on the Creation Research Society discussion site. The email is reproduced here with Dr Humphreys’ permission. END_OF_DOCUMENT_TOKEN_TO_BE_REPLACED

When I consider thy heavens

O LORD our Lord, how excellent is thy name in all the earth! who hast set thy glory above the heavens.  … 3. When I consider thy heavens, the work of thy fingers, the moon and the stars, which thou hast ordained;  Psalms 8:1,3

These verses really struck me as significant as I read them this morning. Let’s look at these two verses carefully.

God has set his own glory above that of the created heavens. And those heavens are a wonder to behold. Just look at some of the beautiful pictures of the NASA Astronomy Picture of the Day. Here I illustrate this (Fig. 1) with their July 30, 2014 picture of the Andromeda galaxy.

Our own galaxy would look very similar to this one. With modern large telescopes we see a universe full of maybe 100 billion galaxies, many of which look like this one. But God’s glory is way above all of this.

When I consider thy (your, singular) heavens, the work of thy fingers ( אֶצבַּע ‘etsba` meaning ‘something to seize with’ but God does not have nor need real fingers, so it is figurative), the moon and the stars (and the latter must include the sun, which was not known by Earth astronomers to be a star until millenia later), which thou (you, singular) hast ordained (כּוּן kuwn meaning to ‘be erect’, stand perpendicular hence causatively to ‘set up’, literally to ‘establish’ or figuratively to ‘appoint’); Psalms 8:3