The distances to quasars 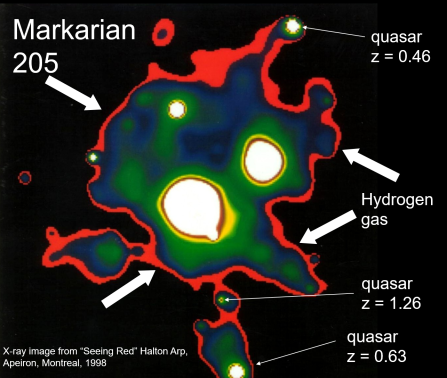 What can we say about the distances of quasars? This is an important question. According to standard big bang cosmology, due to cosmological expansion of the Universe, the very high redshifts of quasars place them at very great distances. If however even one example could be shown that contradicts the standard “greater the redshift the greater the distance” rule then it would undermine the fundamental foundation of the Standard Model of big bang cosmology. It follows that most of the very high redshift objects in the cosmos may not be so distant. And that would radically change our interpretation of the alleged big bang universe.

One such example that contradicts the Standard Model is shown in Fig. 1. The late Halton Arp spent his 60-year research career looking at peculiar galaxies, which he believed contradicted the standard big bang assumptions. Markarian 205 is such a peculiar galaxy within which are seen three quasars. Markarian 205 has a redshift of z = 0.07 but the quasars z = 1.26, 0.63 and 0.46. According to the Standard Model the high redshift quasars should be many billions of light-years behind Markarian 205, but they are clearly seen enveloped in the X-ray emitting hydrogen gas around the galaxy (as indicated by the white arrows).

Arp’s hypothesis, that quasars and active galactic nuclei (AGNs1) have a very large intrinsic component to their redshifts, which is unrelated to their cosmic distance from Earth, is strongly rejected by the Standard Model (big bang) community. In relation to this question I received the following from a reader of my website.2

It is claimed, that the many lines of the Lyman alpha forest in the spectrum of most quasars prove that they are very far away. Also, it is claimed that increasing Lyman alpha forest lines is connected with increased magnitude of redshift, so supporting large distances. Is that observational true?

END_OF_DOCUMENT_TOKEN_TO_BE_REPLACED

A team of astronomers led by Joseph Hennawi of the Max Planck Institute for Astronomy, using the W.M.  Keck observatory in Hawaii, have discovered the first quadruple quasar: four quasars with approximately the same redshift of about z ~ 2 and located on the sky in close proximity.  The online article1 from Max Planck Institute is titled “Quasar quartet puzzles scientists” with the subtitle “Astronomers must rethink models about the development of large-scale cosmic structures.” This is a discovery of the first known group of four quasars with the same redshift found in the same location on the sky. A research paper has been accepted for publication in the journal Science and a preprint is now available.2

The quartet resides in one of the most massive structures ever discovered in the distant universe, and is surrounded by a giant nebula of cool dense gas. Either the discovery is a one-in-ten-million coincidence, or cosmologists need to rethink their models of quasar evolution and the formation of the most massive cosmic structures.1

Caption from original article: Rare find: This image depicts the region in space with the quadruple quasars. The four quasars are indicated by arrows. The quasars are embedded in a giant nebula of cool dense gas visible in the image as a blue haze. The nebula has an extent of one million light-years across, and these objects are so distant that their light has taken nearly 10 billion years to reach telescopes on Earth. This false color image is based on observations with the 10-m-Keck-telescope on the summit of Mauna Kea in Hawaii. Credit: Arrigoni-Battaia & Hennawi / MPIA  (Ref. 1)

END_OF_DOCUMENT_TOKEN_TO_BE_REPLACED

What do quasars tell us about the universe?

Modern large galaxy surveys  have been carried out over the past decade or more and with the use of robotic computer driven telescopes have been able to amass large samples of data on very large numbers of galaxies in the Universe. These surveys supply, via a website, data that anyone with a little knowledge can download and analyze for themselves and as a result test their own cosmology. Among that data, for example, are specifications on the type of object (galaxy, quasar etc), its position on the sky, its redshift, and its brightness (which is given in magnitude units).  (The following is a bit technical but very interesting nonetheless.) END_OF_DOCUMENT_TOKEN_TO_BE_REPLACED

Does the Bible really describe expansion of the universe?

Biblical texts which have been used by some creationists to argue that Scripture supports expansion of the universe were reviewed. To suggest that these texts describe cosmological expansion of space, with galaxies being spread out like the often quoted rubber sheet analogy, is not justifiable and is pure eisegesis. The straightforward meaning is God constructing the heavens above and the earth below as a description of His preparation of a habitat for man. Once the stars were placed in the heavens they were to remain as a constant for all time. (Edited and updated from an article first published in Journal of Creation 25(2):125–127, August 2011, which is also available here.)

We have been told, since Hubble’s discovery in the late 1920s, that the universe is expanding. Hubble found a proportionality between the redshift in the light coming from relatively nearby galaxies and their distance from Earth. This relationship has since been strengthened and extended to very great distances in the cosmos. This has been interpreted to mean that the space that contains the galaxies is expanding and that the galaxies are essentially stationary in that space, but being dragged apart as the universe expands. Often, the rubber balloon analogy is used—galaxies stuck on the surface as the balloon is blown up—which illustrates space expanding and the galaxies being pushed apart from each other (and also that there is no centre, no special place uniquely for us in the universe; figure 1). Nowadays, the expanding big bang universe is considered to be established dogma. END_OF_DOCUMENT_TOKEN_TO_BE_REPLACED 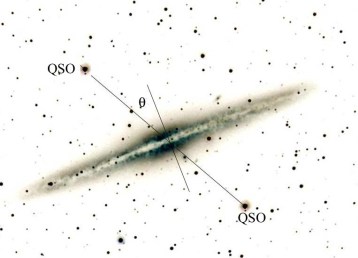 The observational evidence1 that the late Halton Arp and others have accumulated, documented and described  provides a starkly different story about the location and distribution of galaxies and quasi-galactic objects (including quasars) in the universe from that which is promoted by big-bang cosmologists and the popular press.

Instead of the notion that all matter originated in the initial big bang Arp promoted the idea that new matter formed in a series of little bangs with quasars (or QSOs = quasi-stellar objects) being ejected from the hearts of active galaxies, which in turn eject more quasars which eventually evolve into galaxies over millions of years of cosmic time.