The deep state/the cabal/the beast of the book of Revelation is working hard now to bring about world domination. That is to dominate and enslave everyone in the world who are not part of their cabal.

Yesterday we attend a Worldwide Freedom Rally in the centre of Perth. Thousands attended. The MSM said only a few hundred anti-vaxxers. What a lie.

Thousands attended rallies around Australia and around the world. Incredible numbers were seen in Germany, Holland, the UK, Spain, Poland, France the USA and many many other countries. This is the push back against tyranny that so many governments are forcing on their citizens.

END_OF_DOCUMENT_TOKEN_TO_BE_REPLACED

Chapter 4 of the book “When Jesus Returns —what then?” by Jim Gibson. I have edited the text only where necessary, changed underlining to bold text and used the KJVER Bible version.

The antichrist. Probably no other personage in all of Christendom, besides the Lord Jesus, has captivated the imagination of both saint and sinner alike. Books and even movies have been produced centering on this one infamous individual. Since the antichrist is such an integral part of dispensational thought, it necessitates some consideration for discussion.

According to the dispensational view, after the rapture of the church, the antichrist will make his presence known in the world’s political scene. He will make a covenant with the Jewish nation, but will break that covenant after 3½ years. Also, he will sit in the rebuilt temple in Jerusalem and declare himself to be the Jews’ Messiah. The Jews will reject him as their Messiah and, consequently, he will begin to persecute them. This period of “great tribulation” will last for 3½ years ending at the Second Coming, thus precipitating the battle of Armageddon. This is just a brief synopsis of the dispensational teaching regarding the antichrist. There is some variation to this particular interpretation among the dispensationalists, although its basic tenets are the same.

The word “antichrist” is only found five times in Scripture and only mentioned by one apostle, namely, John. However, Paul explicitly refers to the antichrist calling him the “man of sin” and “son of perdition” in Second Thessalonians. He implicitly references him in First Timothy by ascribing to him certain causal attributes. Thus, these are the only two apostles who even addresses this evil personage, and, the following passages are the only texts that we can rightfully or critically examine in order to glean information concerning the antichrist.

“Little children, it is the last time: and as you have heard that antichrist shall come, even now are there many antichrists; whereby we know that it is the last time. They went out from us, but they were not of us; for if they had been of us, they would no doubt have continued with us: but they went out, that they might be made manifest [known] that they were not all of us. … Who is a liar but he that denies that Jesus is the Christ? He is antichrist, that denies the Father and the Son.” (1 John 2:18,19,22)

“And every spirit that confesses not that Jesus Christ is come in the flesh is not of God: and this is that spirit of antichrist, whereof you have heard that it should come; and even now already is it in the world.” (1 John 4:3)

For many deceivers are entered into the world, who confess not that Jesus Christ is come in the flesh. This is a deceiver and an antichrist.” (2 John 7)

“Let no man deceive you by any means: for that day shall not come, except there come a falling away first, and that man of sin be revealed, the son of perdition; Who opposes and exalts himself above all that is called god, or that is worshiped; so that he as god sits in the temple of God, showing himself that he is god.” (2 Thessalonians 2:3,4)

“Now the Spirit speaks expressly, that in the latter times some shall depart from the faith, giving heed to seducing spirits, and doctrines of devils [demons]; Speaking lies in hypocrisy; having their conscience seared with a hot iron; Forbidding to marry, and commanding to abstain from meats [foods], which God has created to be received with thanksgiving of them which believe and know the truth.” (1 Timothy 4:1-3)

END_OF_DOCUMENT_TOKEN_TO_BE_REPLACED

Recently I have been studying the book of Luke, and especially the passage on the resurrection “...I tell you, in that night there shall be two men [people] in one bed; the one shall be taken, and the other shall be left” (chapter 17:34-37). I asked myself when one person (note ‘men’ is not in the original) was taken by Christ at the gathering of the saved, the resurrection, and another was left, what happened to those who were left?

The standard explanation today is that this is a description of the so-called Pre-Tribulation Rapture, the secret Rapture, like portrayed in the “Left Behind” series of books and movies. But that doctrine, which is attributed to John Nelson Darby, an early pioneer of the Exclusive Brethren (early 1800’s), in fact, had its beginnings much earlier with the Jesuit Francisco Ribera and later Cardinal Belamine. And this was independent of those who claim Darby had developed the ideas himself. Maybe he did. He certainly developed the system of theology called Dispensationalism, where he linked the restoration of the land and nation of Israel–God fulfilling His promises to Abraham, Isaac and Jacob–to a scenario of the Church being caught away from the earth, leaving only the Jews as God’s people and that they would fulfil Millennium prophecies (e.g. Isaiah 65:25) during the subsequent 1000-year reign of Christ on Earth. The only part I agree with him on is that God will fulfil His promise to Abraham.

The Jesuit Francisco Ribera originated the idea to divert attention away from the pope being identified as the AntiChrist, which was the standard belief during the 16th through 19th centuries with protestant Bible scholars. The Jesuits did not hold to the idea of physical Israel being restored nor a Pre-Trib Rapture, but they developed the notion of futurism, that most of the prophecies of Daniel and Revelation would come to a future end-time fulfilment in a final AntiChrist figure, who would rule the world from Jerusalem under some sort of 7-year peace agreement. This was to push attention away from the Papacy as the AntiChrist. But then the Papacy had and still does have all the hallmarks of the AntiChrist in the prophecies.

END_OF_DOCUMENT_TOKEN_TO_BE_REPLACED 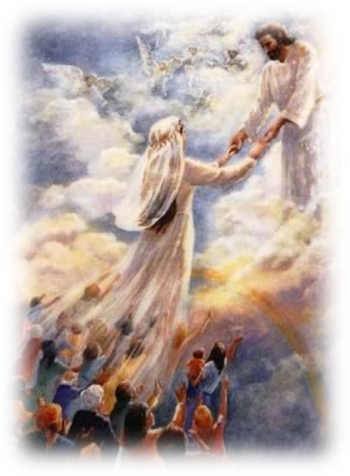 THIS IS THE BELIEVER’S GLORIOUS PROSPECT, GOD’S SURE PROMISE, because Jesus rose from the dead. When He appears, the dead in Christ shall rise first. They shall rise incorruptible, powerful, spiritual, and glorious, in full conformity to His glorious body. His voice will rouse them, His power will raise them, and His glory will surround and adorn them. They shall be like Him, for they shall see Him as He is. What a glorious dawning will the resurrection morning be! How deeply we are interested in it, and yet, how little it exercises our thoughts, or excites our anticipations. It may be the very next morning we shall see, for we may die in our sleep; or for aught we can tell, Jesus may come tomorrow. Are we ready? Are we justified before God through faith in Jesus? Are we just with men, rendering to all their due? The resurrection of the just will be most glorious; they shall come forth perfect in holiness and beauty. We ought often to think of that day, to prepare for it daily, to live and act as if it was just at hand, to do as Paul did, who laboured, suffered and prayed, “If by any means I might attain unto the resurrection of the dead.” Blessed and holy is he that has part in the first resurrection.—Daily Remembrancer April 6 Evening