Part 5 of my review of the book: “The Big Picture: On the Origins of Life, Meaning and the Universe Itself,” by Sean M. Carroll. Part 4 is found here. 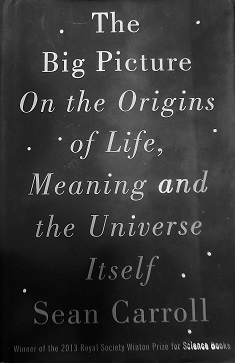 In his chapter titled “Planets of Belief” he uses the analogy of how planets are alleged to have formed naturalistically (which in reality is just wishful thinking) and how we humans form our belief systems by associating together collections of ideas and ‘isms’.

Then he asks how do we know which one is correct. But firstly he has created a straw man anyway. To suggest that a biblical creationist does not believe in the scientific method because she or he believes in a Creator is absurd. Science operates on the present, not the past. Any past creation event is untestable by the scientific method. This shows a clear ignorance of such matters. He goes on to write:

“If you confront a young-Earth creationist who thinks that the world came into being 6,000 years ago with scientific evidence for a very old Earth and universe, their typical response is not “Oh, I don’t believe in evidence and logic.”  Rather, they will attempt to account for the evidence within their belief system, for example, by explaining why God would have created the universe that way.” (p.118)

Carroll believes that his science is some absolute ground upon which he may firmly stand, without realising that same that he accuses the young-Earth creationist of applies to him. His worldview is also based on a set of beliefs. I would say beliefs that are without foundation because they rely on an edifice of untestable theories supported by plethora of unknown ‘unknowns’. Those ‘unknowns’ include, but are not limited to, dark matter, dark energy,1 dark radiation, dark photons, chameleons, inflation and how it allegedly started and stopped, the singularity itself, expansion of space, CMB radiation as the afterglow of the big bang—not the radiation itself, but the fact that it allegedly came from the big bang fireball, when big bang cosmology has a radiation horizon problem—and also the growth of large galactic structure allegedly only hundreds of millions of years after the big bang—a particle horizon problem. These horizon problems mean that there is insufficient time in the standard cosmology to account for the existence of the observations. Yet, on the same page, Carroll writes,

“Abandoning the quest for a secure foundation in favor of a planet of belief is like moving from firm ground to a boat on choppy seas or a spinning teacup ride. It can make you dizzy, if not seasick. We are spinning through space, nothing to hold onto.” (p.118)

The implicit belief here is that his belief is better than a YEC belief though he does not directly acknowledge it. But he is saying something like ‘you’d be mad to believe that!’ Yet he uses the language of belief in reference to his own faith.

“What rescues our beliefs from being completely arbitrary is that one of the beliefs in a typical planet is something like ‘true statements correspond to actual elements of the real world.’ If we believe that and have some reliable data, and are sufficiently honest with ourselves, we can hope to construct belief systems that not only are coherent but also agree with those of other people and with eternal reality.” (pp.118-9, emphases added)

Then he continues with the discussion saying that stable planets of belief are those that are internally consistent and coherent. Also he relies on the fact that others hold to the same beliefs as a judge of their truth. The inference though is that YECs and others who hold a different belief system to his atheistic worldview are not consistent or rational, and their beliefs don’t correspond with reality.

END_OF_DOCUMENT_TOKEN_TO_BE_REPLACED

I presented this message at a small church in Adelaide in 2013. It has just now been posted on the web, and the message is still relevant as ever. In fact, for believers this message daily becomes more relevant as the foundations of the Christian faith are being ‘white-anted’ (eroded) from beneath through the pagan teachings of the big bang origin of the Universe and evolution. That non-biblical worldview has slowly (over the past 150 years) been accepted into the church as true science. The message is ‘the authority of man’s science above the authority of God’s Words.‘ Believers beware of this poison! It is destroying faith and causing many to doubt. But a true understanding of God’s Words and how science fits into the Bible helps us understand the world around us and even answers questions like, if God is a good, merciful and compassionate God, then why is there death and suffering in the world?

END_OF_DOCUMENT_TOKEN_TO_BE_REPLACED

For those of you who don’t already know me, my name is Ben. I’m just going to take a few minutes to share my testimony. I’m hoping that it will really inspire and encourage you on your walk with Christ, and if you’re not currently a believer I want to reassure you that God is real, He loves you and if you give Him a chance He will reveal Himself to you. Jesus said,

Behold, I stand at the door, and knock: if any man hear my voice, and open the door, I will come in to him. (Revelations 3:20)

One thing I find so amazing about the Bible is how the stories, lessons, and parables taught, apply to so many peoples lives in so many different situations. They inspire us, comfort us during times of suffering, give us hope for the future and teach us how to live truly fulfilled lives in relationship with God. The Bible is a personal love letter authored by God and addressed to you.

END_OF_DOCUMENT_TOKEN_TO_BE_REPLACED

How did the universe begin, and how and when was everything in it created and formed? That is probably the most fundamental question of all. Here I compare two cosmogonies (the study of the origin of the universe).