In the book of Exodus chapter 3 we read about when God called Moses to lead the children of Israel out from under the oppression of the Pharaoh of Egypt.  The following is the English translation of the Hebrew text Exodus 3:13,14 (KJB = King James Bible)

END_OF_DOCUMENT_TOKEN_TO_BE_REPLACED

The argument is this: The universe is extremely large—tens of billions of light-years across. The Bible tells us that God made the universe a mere 6000 years ago. How does the light from distant galaxies reach earth then?  Surely that size of the universe demands an enormous timescale?

But couldn’t God just have created the light in transit. No, that would be deceptive. It would mean a stream of light carrying false information for billions of years to come.

But surely even you must admit that the simplest and even most logical explanation (if you don’t first presuppose that the biblical account in Genesis is correct) is that the light, from  galaxies millions of light-years away, did indeed travel for millions of years to get here?

END_OF_DOCUMENT_TOKEN_TO_BE_REPLACED

Some of the best physical scientists who ever lived were firm believers in the God of the Bible. These include Sir Isaac Newton, Robert Boyle, Blaise Pascal, Tycho Brahe, Nicolas Copernicus, Galileo Galilei, Gottfried Leibnitz, Johannes Kepler, Carolus Linnaeus, John Dalton, Christian Huygens, Robert Hooke, Michael Faraday, Joseph Henry, James Joule, James Clerk Maxwell, John Strutt (aka Lord Rayleigh)  to name a few. In fact the development of modern science only occurred in the climate of the Judeo-Christian culture which posits that the Creator never lies and created laws that never change. Francis Bacon, who is credited with the beginning of the scientific method,  said,

He refers to both the Bible and the laws of nature. They can both be relied upon. They never contradict and so they should support one another. Therefore scientific research can only flourish when coupled with a clear and straightforward understanding of God’s Word.

END_OF_DOCUMENT_TOKEN_TO_BE_REPLACED

The big bang model, used to describe the observations made in the universe, according to its advocates, now precisely has determined the history of the Universe. See left graphic. Yet to do so it is filled with unproveable fudge factors. That may sound like an exaggerated claim but it seems to be the state of cosmology today. (This article was edited and updated from my article ‘Cosmology is not even astrophysics,’ originally published 3 December 2008, creation.com.)

This situation has come about because of the unverifiable starting assumptions are inherently wrong! Some brave physicists have had the temerity to challenge the ruling paradigm—the standard big bang ΛCDM inflation cosmology.1 One of those is Prof. Richard Lieu, astrophysicist, of the Department of Physics, University of Alabama, who wrote:2

‘Cosmology is not even astrophysics: all the principal assumptions in this field are unverified (or unverifiable) in the laboratory … .’ [emphasis added]

END_OF_DOCUMENT_TOKEN_TO_BE_REPLACED

Here I review an article originally published in “Chinese Today.” The English translation of the article appears below with my comments (in brown) interspersed.

Seeing God in the Big Bang

END_OF_DOCUMENT_TOKEN_TO_BE_REPLACED

Historically the Universe was once believed to be finite.  Finite means its volume is a finite number.  Also the biblical view is and was that the Universe was created approximately some 4000 years before the birth of Christ. Psalms 147:4 declares,

“He [God] tells the number of the stars; He [God] calls them all by their names.” (KJVER).

To ‘tell’ means to count and therefore the implication is that the Universe contains a fixed or finite number of stars and hence of galaxies. Only God is infinite (Ps 147:5) but His created Universe is finite and even bounded. That means it has a centre and an edge.

The view was not universally held though. Hindu texts seemed to indicate an eternal, albeit a cyclical universe and infinite in size. But our modern scientific understanding of the Universe has developed from Judeo-Christian beliefs. Within that framework, until essentially the beginning of the 20th century it was accepted the Universe was like a ball of stars around our planet Earth.

Only with Edwin Hubble’s observations did this notion change, as he settled the big debate of the 1920’s, showing in 1929 that the Universe contained many galaxies like our own. Secondly, by observations of redshifts of galaxies and their distances, he discovered that the Universe is expanding, for which he would have won the Nobel Prize, but the selection committee followed the rules established by Nobel (who disliked astronomers) and would not award it to him. He died before they changed the rules. Nevertheless Hubble himself even questioned his own conclusion over the decades following his “discovery.” (I would note here that Lemaître published before Hubble, in 1927, wherein Lemaître developed the now famous relation, the Hubble law–later named after Hubble–but also Lemaître fitted to actual observational data, though his data were a bit poorer quality than Hubble’s in 1929.)

But then until the mid 1960’s, the dominant cosmological belief for the Universe,  was the Steady State (SS) cosmology. It held to an eternal (non-cyclical) universe, which was infinite and unbounded. With Hubble’s discovery of an expanding universe and then the discovery of the Cosmic Microwave background radiation (1965) Hoyle and Geoffrey Burbidge modified (1993) their SS model to incorporate cyclical periods of expansion and collapse, yet still an eternal universe–called the Quasi Steady State Creation (QSSC) cosmology.

END_OF_DOCUMENT_TOKEN_TO_BE_REPLACED 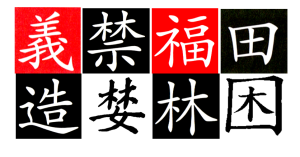 Do you know the meaning of this Chinese word?

It translates to ‘boat’ in English.  Chinese characters, ideograms, can be formed from radicals which themselves are pictograms, which have their own individual meanings. The characters forming the word ‘boat’ are as follows:1,2

END_OF_DOCUMENT_TOKEN_TO_BE_REPLACED

This is my response after reading an online article about the purported discovery of dark matter:

A theorist has an idea about the mixing (coupling) of dark matter axions with normal matter through an S/N/S junction. Firstly, the axion is a theorized particle in the WIMP (Weakly Interacting Massive Particle) category but this expected particle with a mass of 1 μeV is in the WISP (Weakly Interacting Slim Particle) category. The latter is what I have been searching for in a lab experiment—a 53 μeV mass paraphoton—for four years.1  In all these type of experimental searches, these types of putative particles cannot be directly observed but only by their expected effects on normal matter and radiation sectors. So a theorist calculates the magnitude of the mixing parameter (nowadays < 10-8, or much lower) and they run experiments to put an upper limit on it. So if you get a signal­—instead of just noise—the signal is from real normal type radiation, thus you have to exclude all possible spurious signals, and usually the detection expected is extremely small so it becomes extremely problematic to definitively say—even if you had an unknown signal—that you have made a detection.

END_OF_DOCUMENT_TOKEN_TO_BE_REPLACED

1) Where did the Universe come from?

Man puts all his faith in cosmology to answer this fundamental question. But cosmology is not even science, it is just philosophy. This has meant that man has had to invent fudge factors to make his theories work, such as the totally-just-made-up stuff called Dark Energy, Dark Matter, and Inflation. There isn’t a shred of any real laboratory evidence for any of them. Not any! They also claim the Cosmic Microwave Background radiation as the afterglow of the Big Bang, thus supposed to be coming from all directions. Yet it seems to be associated with the orbital plane of our solar system’s planets! But that makes no sense at all!

END_OF_DOCUMENT_TOKEN_TO_BE_REPLACED

You get up in the morning and go to work or school. But everywhere around you screams “there is no ultimate reason” to do so.

The universe began in some random explosion, from the quantum fluctuation of nothing, some Big Bang we are told.  Over billions of years stars formed and exploded building the elements (C, N, O etc) that all plants and animals are made from, we are told. We are just reorganized star dust, they say.

It is said that man is just the product of millions, even billions, of years of evolution, the most recent stage in some unguided evolutionary process.  Finally man evolved from some past ape-like ancestors several million years ago, so we are told.

“There is no doubt now; no serious scientist has any doubt that evolution is a fact, in the sense that we are cousins of chimpanzees, monkeys and wombats and cassowaries.”