Why look for a new theory of gravity if the big bang cosmology is correct?

Occasionally we read in the popular press, especially online, that someone has come up with a new theory of gravity. Why is that even necessary if the current theory describing the evolution of the universe is so correct?

The standard ΛCDM big bang cosmology is derived from an application of certain non-biblical boundary conditions to the physics of Einstein’s general relativity theory. But when that was applied to the universe as a whole, two problems developed for the secular model. One is the need to add in dark energy (or the cosmological constant, Λ (Lambda), to Einstein’s field equations) and the other is the need for a significant amount of invisible cold dark matter (CDM).

On the scale of galaxies and even clusters of galaxies Newtonian physics is used as it is the low gravity limit of general relativity. But without the addition of dark matter the resulting theory, using the known density of visible matter in galaxies (see Fig. 1) and clusters, does not match observations. But for more than 40 years now dark matter has been sought in various lab experiments with consistently negative results. This has developed into what is called the dark matter crisis.1

Figure 1: Typical rotation curve of a spiral galaxy: Speeds (V) in km/s units as a function of distance from the centre of the galaxy (R) in 1000 light-year (ly) units. The upper curve shows the speeds of the stars in disk region determined from their visible light and the gasses beyond that determined from radio frequency emissions. The lower curve shows what standard Newtonian physics predicts should be observed. The discrepancy is made up by positing the existence of invisible dark matter. Credit: Wikipedia

Occasionally a claim is made that a theorist has some inkling of what dark matter particles might be but the crisis remains.2 Dark matter particles have been sought without success in the Galaxy using very sensitive detectors deep in underground mines,3 or with the Large Hadron Collider (LHC) over 10 years of experiments looking for the lowest mass stable particle in a theorised class of as-yet-undiscovered supersymmetric particles.4

The observational data from thousands of galaxies together with the negative outcome of all the experiments searching for Dark Matter particles indicate that either something is wrong with the physics we use or that the expected dark matter is much more elusive than supposed, or, indeed, does not, in fact, exist—which gets us back to something being wrong with the physics. END_OF_DOCUMENT_TOKEN_TO_BE_REPLACED

An update: Correspondence on cosmology

This is my reply to a friend from the same university that I left two years ago to give him an update to my cosmology related research.

I hope you don’t mind but I thought I would take this opportunity to answer your questions but also post this on my blog so that others who might have similar questions can get answers. I have coloured your text in green with my responses inter-dispersed in black.

I’ve recently watched the “Evolution’s Achilles Heels” documentary and was impressed by some of the points that were raised.

I am glad you enjoyed it and it raised questions in your mind. Then it achieved its purpose.

This has led me to your YouTube channel where I have watched your videos “Cosmic Mythology: Dismantling the Big Bang Theory” and “Starlight, Time and the New Physics”, which I really enjoyed as I’ve got a background in astronomy (I majored in Physics, Applied Maths and Astrophysics at UWA, similar to you I guess.)

I have added hyperlinks to the two videos I believe you must mean. END_OF_DOCUMENT_TOKEN_TO_BE_REPLACED

Lift up the Word with gentleness and respect

Someone writes a book, or develops a theory (or even just presents some speculation), and then a believer in a church uses that information and says something like,

“The YEC position is true and here’s the proof! You are crazy if you can’t believe it because we have this evidence.”

Sadly, sometimes I hear this sort of thing.  Folks it just should not happen. And a person who hears it might react, complaining with,

“A (creation ministry) speaker filled their heads with stuff, which isn’t true about the YEC interpretation of the Bible.”

Well that’s how the recipient may have understood the attack on his belief system, which was obviously not a biblical creationist one. Maybe he believes in theistic evolution or big bang or both. (I am not supporting those inconsistent interpretations, but I am talking about our approach.) This sort of thing has led to a division in the fellowship. Some even claim that the whole subject of biblical creation is divisive. That is not what I am talking about, but rather how some well-meaning people use speculations and theories like clubs trying to win an argument, when they should be categorized only as man’s attempts at a solution to a biblical creationist problem. END_OF_DOCUMENT_TOKEN_TO_BE_REPLACED

If the universe is only 6000 years old according to Moses (Genesis chapters 5 and 11) then biblical creationists have a starlight-travel-time problem.  The universe is tens of billions of light-years across. There are good scientific grounds to believe that is the case. So shouldn’t it take at least billions of years for light to reach us from the distant galaxies?  How do you reconcile the size of the Universe with only the 6000 years or so available since the Creation, according to Genesis chapter 1 in the Bible? I once listed five possible areas that we might find a solution.1

I believe that within the following options or categories explanations may be found that are consistent with the text of Genesis and so maintain the interpretation of 6 × 24-hour literal earth-rotation days of creation, about 6000 years ago. They are briefly discussed here in no particular order. 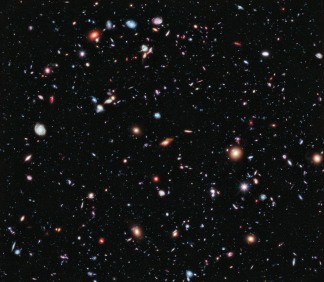 One possibility is that the language of Genesis is phenomenological language (describing appearance). In this case, stars were made billions of years before Day 4,2 but in such a manner that the light from all stars (and galaxies), no matter how far away, all arrived at the earth on Day 4 and so their light could have been seen first at that moment. This is reference frame ‘time-stamping’ events from the moment they are seen on Earth.

Lisle’s timing or clock synchrony convention3,4 describes this idea. He presented two possible interpretations: One is phenomenological language and the second has to do with the physical nature of  the created universe. END_OF_DOCUMENT_TOKEN_TO_BE_REPLACED

Questions about my use of Carmeli’s cosmology

Below I respond to an inquiry about the cosmological model presented in my book  and Carmeli’s Cosmological Relativity theory. I used Carmeli’s cosmology to create a biblical creationist model for the origin of the Universe, with a timeline which includes the 6 days of Genesis creation beginning about 6000 years ago. I took parts of Carmeli’s big bang cosmology and added biblically based hypotheses (and speculations) to make it conform to Scripture.

That means  it is no longer Carmeli’s cosmology but a sort of hybrid cosmology. Carmeli only constructed a 4 dimensional (4D) space-velocity model for the Universe. He never found a full 5D model for the whole Universe which might be used to construct a history close to the creation epoch. I theorised on a new model–call it the Carmeli-Hartnett model if you like–which is 5D. I added the time dimension to Carmeli’s space and velocity dimensions, to create a linearised 5 dimensional model. That is shown in Appendix 6 of my book “Starlight Time and New Physics“. I then used that, making additional assumptions, to explore the idea of rapid time-dilation during Creation.

I do not claim it is the answer to the creationist starlight-travel time problem. If God did something like I describe it could provide us with an understanding of it. Adding new physics may be a simple way to avoid many fudge factors in cosmology but it does mean adding a new dimension that is very hard to even conceptualise. END_OF_DOCUMENT_TOKEN_TO_BE_REPLACED

A solution to the creationist starlight-travel-time problem