Can we definitively know the global structure of spacetime? This is a good question. It is one that is actively discussed in the area of the philosophy of modern physics.1,2

However it is a question that highlights the fundamental weakness of cosmology and hence of cosmogony. (Cosmology is the study of the structure of the cosmos whereas cosmogony is the study of the origin of the universe.)  That weakness is the inherent inability to accurately construct any global cosmological model, i.e. a model that accurately represents the structure of the universe at all times and locations. The reason for this is underdetermination.3

“There seems to be a robust sense in which the global structure of every cosmological model is underdetermined.”1

In the philosophy of science, underdetermination means that the available evidence is insufficient to be able to determine which belief one should hold about that evidence. That means that no matter what cosmological model one might conceive of, in an attempt to describe the structure of the universe, every model will be underdetermined. Or said another way, no matter what amount of observational data one might ever (even in principle) gather, the cosmological evidence does not force one particular model upon us. And this underdetermination has been rigorously proven.1

END_OF_DOCUMENT_TOKEN_TO_BE_REPLACED

The discovery of gravitational waves

On 14 September 2015 at 09:50:45 UTC the two gravitational wave detectors of the Laser Interferometer Gravitational-Wave Observatory (LIGO)—one at Hanford, Washington and the other at Livingston, Louisiana—simultaneously observed a transient gravitational-wave signal. The signal exhibited the classic waveform predicted by Einstein’s general relativity theory for a binary black hole merger, sweeping up in frequency from 35 to 250 Hz, and exhibited a peak gravitational-wave strain of 1.0 × 10−21 at the detectors.1

The two detectors recorded the same signal, which matched the predicted waveform for the inspiral and merger of a pair of black holes and the ringdown of the resulting single black hole. The signal was observed with a matched-filter signal-to-noise ratio of 24 and a false alarm rate estimated to be less than 1 event per 203,000 years, equivalent to a statistical significance greater than 5.1σ (where 1σ represents 1 standard deviation).2 In other words, the detection is highly likely to be real.

END_OF_DOCUMENT_TOKEN_TO_BE_REPLACED

This lecture deals the historical philosophical development of the notion that the universe is very old. It outlines how worldviews have changed and developed that are intended to replace the biblical worldview with an atheistic humanist worldview. That has meant assuming long ages for the earth and the universe. It is shown how in reality it is a pagan worldview that has grown to dominate ‘so-called science’ today. It is not actually science but scientism. Evidence/observations do not speak for themselves, they must be interpreted and nowadays it is all within the big bang/evolution/”old” universe worldview.

Lecture was given August 1st 2015. See Age and Reason Seminar Adelaide for details.

See also other lectures given at the same seminar:

END_OF_DOCUMENT_TOKEN_TO_BE_REPLACED

—The bankruptcy of big-bang thinking and its ‘dark’ fudge factors

Six important questions are asked in regards to the alleged big bang origin of the Universe? These questions highlight the bankruptcy of big bang thinking, about the origin of the universe that needs numerous fudge factors.

Embracing the ‘darkness’ has led man to develop unprovable fudge factors to plug the holes in his failed theory. I deal with each of these:

…. 14 more problems are listed but not discussed in any detail.

Six major fudge factors are highlighted as a result but there are many more. The big bang needs these unverifiable fudge factors; so why hasn’t it been discarded? The answer is simple. The alternative, for the atheist–a Creator God–is unbearable, and for the compromised theist or deist, who accepts a big bang origin for the universe, the Creator as described by a straightforward reading of the Bible, is unbearable.

END_OF_DOCUMENT_TOKEN_TO_BE_REPLACED

Is the big bang evolution story of the Universe really science? And is the big bang a valid starting point to argue that science supports the biblical narrative history from the Genesis account and elsewhere? Can we consider a big bang creation in our apologetics?

Foundations for our apologetics

In apologetics1 we are engaged in a spiritual war, which we fight on a daily basis. We win some battles, we lose some, but we know that the war will eventually be won by God. He has told us that fact. Often however our comrades in arms, i.e. other Christians, may themselves not clearly see the enemy’s tactics. That does not mean they cannot see the enemy but may be they are too close in battle to see the whole war.

Faithful are the wounds of a friend; but the kisses of an enemy are deceitful. Proverbs 27:6 (KJV)

Sometimes we must criticise what our friends have said in an effort to prevent the enemy from developing a breach in the wall of truth and eventually destroying the foundations. In this case our friends are our fellow Christians who have gotten off the track by absorbing too much of the pagan culture in which they live.

END_OF_DOCUMENT_TOKEN_TO_BE_REPLACED

Notes of a lecture on starlight and time. Do they present an insurmountable problem for biblical creationists? The lecture was given August 1st, 2015. See Age and Reason Seminar Adelaide for details.

Is this a brick wall? Does it mean the bible must be wrong? Distances are billions of light-years. Surely that must mean light took billions of years to travel here from the distant cosmos? How do you explain that?

So if you drive your car a distance of 100 kms and travel at 50 km/hr it will take you 2 hours.  10 billion light-years represents a distance in the Universe to some of the most distant galaxies like those pictured here in what is called the Hubble Ultra-Deep Field 2014.

END_OF_DOCUMENT_TOKEN_TO_BE_REPLACED 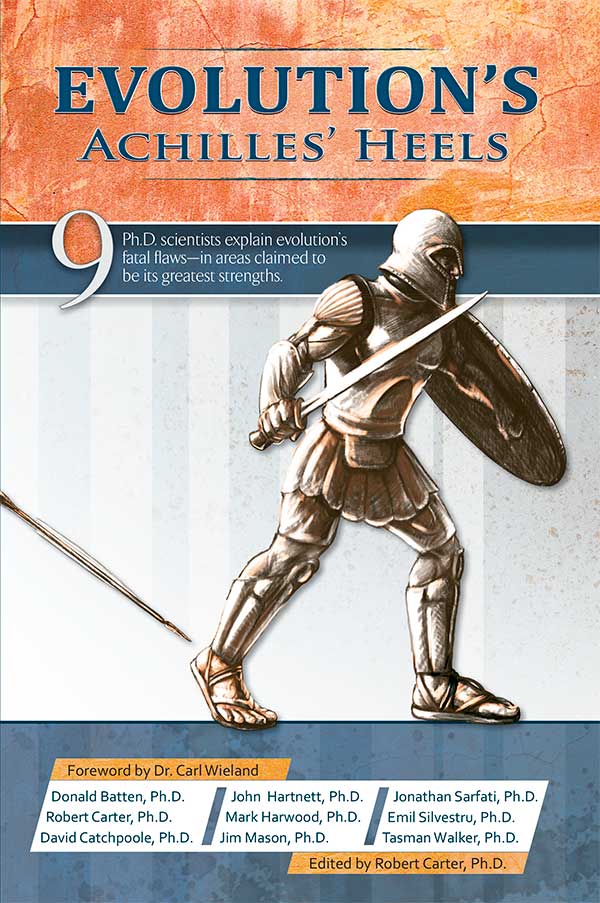 Evolution, in the cosmic sense, from the nothingness of the universe before the big bang and the alleged initial singularity, from which all energy, and hence all matter (i.e hydrogen gas), is alleged to have arisen, to the formation of our solar system, to the origin of life itself, to the evolution of man on Earth, has many fatal flaws. For that reason the title of this book (about these issues) makes use of the plural form of the expression “Achilles’ heels”.

The following article was first published in Evolution’s Achilles’ Heels (Chapter 7, but slightly edited here). The book is available from Creation Ministries International.

END_OF_DOCUMENT_TOKEN_TO_BE_REPLACED 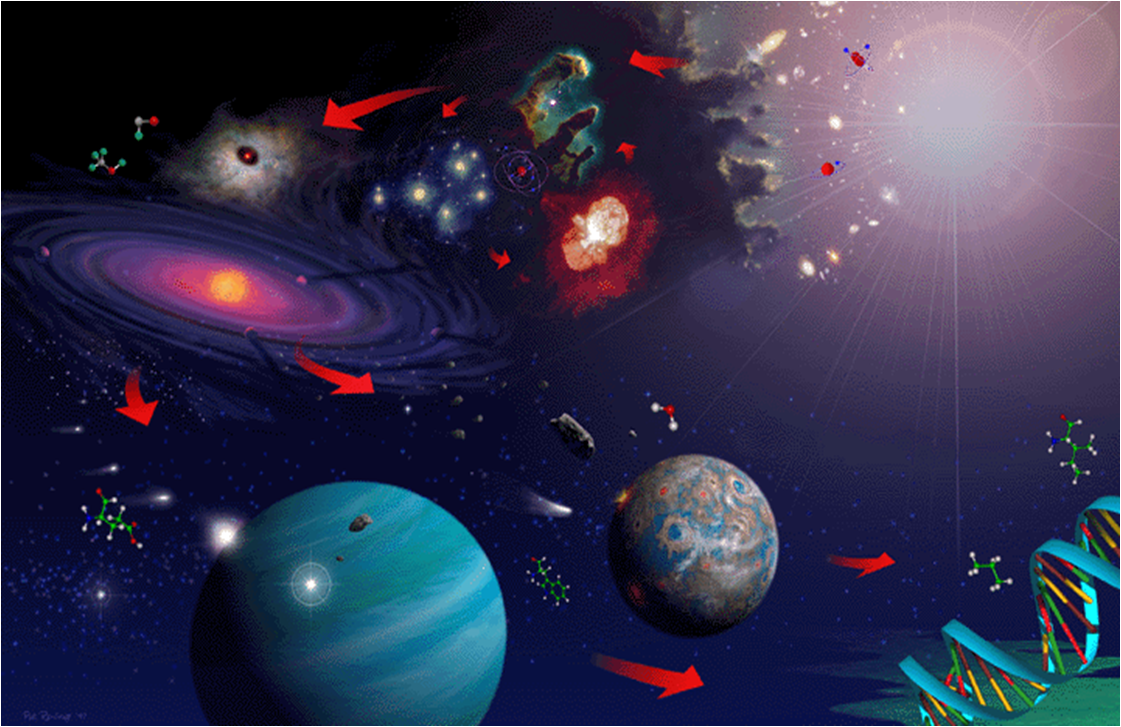 The big bang is a good story … as far as storytelling goes.

“Storytelling has been the single most powerful communication tool for thousands of years and we are just starting to understand how relevant and significant it is today.”1

But as Mark Twain once is reputed to have said:

“Never let the truth get in the way of a good story,”

END_OF_DOCUMENT_TOKEN_TO_BE_REPLACED

—sequel to ‘A biblical creationist cosmogony’1

Abstract: I speculate on a new cosmological redshift mechanism due to ‘tired light’ in a created static-yet-unstable 6000-year-old finite-size universe. This utilises Lisle’s ASC model, but I show a one-to-one correspondence with the Hartnett-Carmeli model that was so successful when tested against type Ia supernova measurements. This gives a theoretical underpinning to the ASC model with a Hubble law redshift-distance dependence, but not from expansion, yet where, today, we see all sources in the universe only 6000 years after they were created. Article first published by Answers Research Journal 8 (2015):77–83. PDF available here.

In standard cosmology it is normal practice to assume no Creator and that the material world is all that there is. Therefore it follows that only the laws of physics, time and chance are to be considered when formulating a description of the creation and history of the universe we see. This means that within the visible horizon there has been sufficient time for the gravitational and electromagnetic influences2 of the matter elsewhere to be felt locally.  Assuming an expanding universe, the only limitation comes from the notion that the universe has expanded faster than the speed of light (c)3 and therefore this has introduced to the Cosmic Microwave Background (CMB) radiation what is known as the horizon problem.4

END_OF_DOCUMENT_TOKEN_TO_BE_REPLACED

This is my reply to a friend from the same university that I left two years ago to give him an update to my cosmology related research.

I hope you don’t mind but I thought I would take this opportunity to answer your questions but also post this on my blog so that others who might have similar questions can get answers. I have coloured your text in green with my responses inter-dispersed in black.

I’ve recently watched the “Evolution’s Achilles Heels” documentary and was impressed by some of the points that were raised.

I am glad you enjoyed it and it raised questions in your mind. Then it achieved its purpose.

This has led me to your YouTube channel where I have watched your videos “Cosmic Mythology: Dismantling the Big Bang Theory” and “Starlight, Time and the New Physics”, which I really enjoyed as I’ve got a background in astronomy (I majored in Physics, Applied Maths and Astrophysics at UWA, similar to you I guess.)

I have added hyperlinks to the two videos I believe you must mean.