Recently I watched the 2016 movie “Arrival“. It depicts the story of the arrival, at twelve separate locations around the earth, of twelve mysterious spacecraft. The key character, a linguistics professor, Louise Banks is seconded by the military to interpret the language of alien visitors.

The movie is based on the short story “Story of Your Life” by Ted Chiang (1998).1 It was directed by Canadian filmmaker Denis Villeneuve and stars Amy Adams, Jeremy Renner and Forest Whitaker.

Here is the trailer from Paramount Pictures:

The 7-foot tall aliens, heptapods,2 which look something like octopuses with 7 tentacles and a human hand, are depicted as enormously technologically advanced on humans. Their 7 tentacles each have 7 tendrils, out of the centre of which they eject an ink-like substance. Remember octopuses produce a black ink like substance. (And you might ask why all the 7’s. It’s science fiction after all.)

Alien language and perception of time

These alien heptapods use a vocal communication that is unpronounceable by humans (classified as Heptapod A), but, as professor Banks discovers, they also have a written script (Heptapod B), which can be dissected and interpreted. But strangely enough the vocal and writing components are unrelated, in the sense that Heptapod B does not represent sound. Heptapod B is written with the ink-like substance they eject from their tendrils and they are able to manipulate it in space to form the characters of Heptapod B.

We are told that a deep understanding of their language can induce a non-linear perception of time in those who learn it. This idea is where it really gets crazy.

The story introduces the concept of when one learns a new language, one also learns to think the same way that the producers of that language think–the Sapir-Whorf hypothesis–because one’s brain is rewired to think that way.

Then, with this new perception of time, time-like loops are introduced (really time paradoxes) where, because the professor experiences (in her thoughts or perception) the future, she gets knowledge (of future events) that she then uses to determine the future events she perceives.

The concept here of our perception of time does have some basis in real physics. It is still an open question of why do we remember the past and not the future. That might sound strange to some but most of the laws of physics are time reversible. The Second Law of Thermodynamics, where entropy never decreases in a closed system, but generally increases, is an exception and the primary reason we always perceive the forward arrow of time.

However, for particle physics (including electromagnetism) there is no preference to which way time flows. Physicists call this a symmetry. And in this movie this is highlighted by the name, Hannah, of the yet to be conceived daughter of Prof. Banks, about whom she experiences future memories. The word “HannaH” is a palindrome–a sequence of letters or characters that can be read either forward or backward and produce the same word. 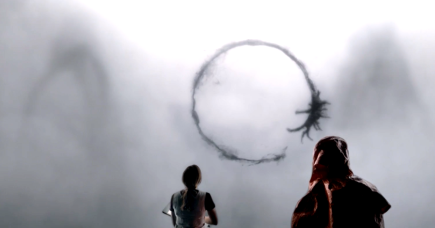 Heptapod B is written in a circular way and is palindromic. At least that is what I understood it was intended to be. Looking at one of the alien sentences (on the right) it does not seem to have reversible symmetry, in the structures that form their words (spiky bits that stick out), though, of course, a circle is not linear in one sense as it is represented on a plane.

Of course, this story is just that, a story and total fiction. Nevertheless, it is an entertaining one.

Evolution in the story

Heptapod spacecraft (referred to as “Shells”) are 450-meter-tall interstellar craft which are made of some sort of a black, stone-like material of unknown composition, and are oval and somewhat flat in shape. They completely lack any surface features and emit nothing detectable, heat, radiation or anything else. They have no visible thrusters, but the aliens are able to manipulate gravity and somehow have mastered interstellar travel with their advanced technology.

The implication is that the aliens are enormously more evolved than humans. They have travelled across the vast distances of space and have come to Earth. The big question in the movie is why are they here. It seems they have come to give humans a “gift” or a “weapon” and the uncertainty of how the alien language is translated in this regards is used to depict how easy human societies can be driven to attack anything they perceive as a threat.

I detected two main messages in this film.

One message is that humans are divided as a race and depicted as violent and too easily ready to fight the aliens and each other. But these aliens, who have evolved not only in advanced technology but also physiologically and mentally, have come to unite the peoples of Earth. They do this by landing in 12 separate sites and giving a piece (a 12th) of a message (the “gift”) to each nation they are able to communicate with, at the various sites. It turns out that that gift is their language (Heptapod B), which is said to be 2-dimensional, whereas human languages are 1-dimensional. By this it is meant that we perceive time in a linear fashion but heptapods write complete sentences as a whole unit rather than from a starting point to a finishing point.

Of course the implication is that the heptapods have biologically evolved over maybe millions of more years than humans have been around and they have mentally advanced the state where they use the language described here. This is the second message. Aliens from outer space have come. They look like monsters but because they have advanced tech they are more evolved, probably by the fact that they have had millions of years more time for Darwinian evolution to work. Therefore humans should listen to them.

The aliens are like space saviours. They are powerful but benevolent and want to unite the human race by helping them in the future as they have helped them in the past. The suggestion is that with the knowledge of the Heptapod B language the humans will evolve and wars will cease and people will be united. The movie depicts such a scenario, with Banks remembering a future meeting with the top Chinese military officer where they celebrate not going to war with each other or the aliens.

It is the same old hypothesis. Life could not happened on Earth by accident in the first place so some aliens must have created life here and have since helped human evolution along. In this movie the aliens arrive to give humans a gift that will help them evolve further by changing their perception of time. This is all packaged in nice memories of a child, with nice warm fuzzy feelings.

But neither alien creators, nor panspermia, nor random chance is the answer to where we come from. The notion of ‘alien creators’ just pushes the problem back further. Ultimately you have the problem of who created the first aliens. So to say it was an alien being, who is not omniscient, omnipresent and omnipotent, does not solve the problem.

Life was created by the self-existent One, who is uncreated, as the Bible tells us in Genesis. God made man in His own image, not heptapods, and if there are any 7-tentacled alien creatures showing up on my doorstep in the future I am sure they will not be from another star system but from hell itself, demons who have come to deceive the world. This story is just another in a long line preparing the world for alien deception.

2 replies on “The movie “Arrival””

Excellent. Loved your last paragraph.
I too used to believe in the general, overall nonsense the movie depicts. Not the language part of this movie, but Star Trek, Star Wars, and the like.
I am so grateful to the Lord Jesus Christ for delivering me from it. A lot has to do with Him causing me to understand and fully believe Genesis, and in the young Universe, let alone young Earth, that it teaches.

This movie depicts the reversal of God’s action at the Tower of Babel and the “wonderful, peaceful world” that results. And the non-human sentient beings who lead the reversal are basically H.P. Lovecraft’s Cthulu, in other words, devils.