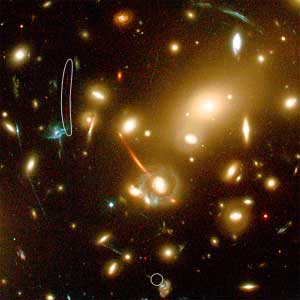 As six-day creationists, can we know what God did when he created this vast universe? If we agree that God created the universe, and it was created in a form that is essentially like we observe today—a mature creation—very large, tens of billions of light-years across—very old in appearance, in terms of processes we observe—then we have two possibilities within the creationist worldview:1

We can take the position that we cannot know how God did it because it was supernatural and beyond our understanding. However, we should not make untenable claims such as that supernovae (exploding stars) represent death and hence must have occurred after the Fall. (A supernova is a light show resulting from exploding gas. It cannot be construed as death in the biblical sense.3) Or even the claim that modern physics (that

developed post-1905, starting with Einstein’s three papers published in Annalen der Physik, which dealt with the photoelectric effect (quantum theory), special relativity and Brownian motion) is all wrong. One idea that has developed in recent times is that modern quantum theory, modern special and general relativity and hence modern astrophysics and cosmology, which include both of the latter, are wrong. Some creationists even reject these modern ideas, preferring only classical physics, while others claim we cannot even know the physics of this universe. These notions I reject.

But there is a big difference between repeatable, operational science and something that is extrapolated back into the unknown unobservable past, what has been called in creationist circles ‘historical science.’ The science done in the lab, which includes modern-clock tests of special relativity, hence of modern physics, yields reliable repeatable results that are consistent with that theory. It was because of the very notion that the Bible promoted a consistent reliable creation, hence consistent laws of nature, that modern science developed in the first place. It is because those laws are stationary that we can know anything at all about the universe by our own observations.

If we are to make the assumption that we cannot know, or that the laws of nature we test in the laboratory are not the same as those we observe elsewhere in the cosmos (excluding the idea that what we do know is incomplete), then we have no basis to test any hypothesis about the universe. Taking that idea further, since we cannot travel to the nearest star, why not suppose that the laws of nature and the structure of the universe are such that all of the stars lie within a four-light-year radius of Earth? That idea could never be disproved because it is always possible to say the laws and structure of the universe are consistent with this notion. And we would not have a light-travel-time problem.4

At the 6th International Conference on Creationism in Pittsburgh, 2008, there were presentations revolving around the rejection of most of modern physics, e.g. trying to find a model for the simplest atomic species without quantum theory. This does not seem to be appropriate as it ignores the last one hundred years of research.

If position number 2) above is taken, a straight-forward reading of Genesis as true history, we would not need to say that everything in the universe must be 6 thousand years old, as measured by processes in their own frame of reference. That is not contradictory of the creation timeline. But those processes measured by Earth clocks must have taken less than 6 thousand years to happen. God’s creation is knowable and understandable (at least those aspects limited to the physics we know today) to us as humans. He made the universe in a way that is rational and reasonable, and the efforts since the development of modern science, say, over the last thousand years, have revealed a lot of truth. (Of course along the way we have had to throw out a lot of error.)

Modern physics, by and large, is reliable; we can test relativity with GPS satellites and even with Earth-bound modern atomic clocks. Every time we use a device with a laser, we are using something developed from quantum theory. But that is not the same thing as understanding what happened in the cosmos, in the past, billions of years ago, based on the assumption of the constant speed of light and the size of the universe. It is not so clear, and we cannot interact with the universe like we can with our experiments in the lab.5 The former is not really repeatable science and hence it is very weak in its predictive power.

But position number 2) above is another way of saying that we can trust the Lord, we can trust modern science, where it is testable, and we can, in principle, know what God did. One of the reasons is that the laws of nature are God’s Laws; He created them. Although the idea of many biblical miracles is that they involve highly unusual rates of change (changing water into wine, calming a storm, etc.), these miracles are the exception, not the rule.

So this is not about the rejection of ‘millions or billions of years’ per se; it is really about the truthfulness of God’s Word. We really should not even use terms like ‘young-earth creationism’ (YEC) or ‘old-earth creationism’ (OEC); we could instead adopt ‘biblical creationism’, or to be clearer ‘straight-forward history in Genesis biblical creationism’ (SHGBC).6 Because surely it is about bringing people back to a clear understanding of the veracity of the Word of God, from Genesis all the way through. ‘Young earth’, meanwhile, implies its age is young compared to the supposed long geologic ages, which are contrary to the Genesis timeline. And so often arguments from the other side are a caricature of the creationist position, or a straw man argument, but some may have been once held by creationists. We should hold ourselves to a higher standard. We will never satisfy the sceptics who reject the idea that God’s Word can be relied upon, but we must challenge those who ‘put their heads in the sand’ over the last hundred years of modern science.

If we accept all observations about the Universe, realizing they are tainted with certain assumptions, which may be wrong, then creationists have a starlight-travel-time problem. This is true if we believe only 6 thousand years have passed since the creation of the most distant light sources, and that they were all created at that time, as measured by normal Earth clocks, and we hold to the convention that the timer was started when the star was created. But if the timer was started when the light first arrived on Earth, when someone first saw the event, then this is the Anisotropic Synchrony Convention,7 and there is no light-travel-time problem. There is nothing to answer. Or if cosmic clocks ran fast during Creation Week compared to Earth clocks, there would be billions of years of process going on out there, and plenty of time for light to get here in the past 6 thousand years, as measured by Earth clocks. This is a relativistic effect and relates to both Humphreys’ model and mine.8,9  Our models, though similar in some ways, both relying on relativistic time dilation, are very different in other ways, with different mechanisms. In all cases the universe is large, and normal, testable physics applies. It also allows for a certain starting point we could call ‘mature creation’, as the place where God started. The only difference is we do not know which is the correct model or time convention. Maybe none of them are, but we should keep looking within the realms of modern testable physics.