An article copying that appeared on http://www.rense.com titled ‘Big bang theory busted by 33 top scientists’ (27 May 2004). See screenshot on left. 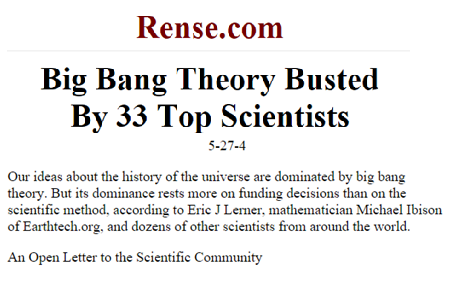 The list of names of scientists who agreed with the Statement—that is, disagreed with the theory of a big bang origin of the universe—is available here and many more added their names to that list.

These scientists only agreed on one thing. They were all united in their conviction that the big bang was a bust.

A renewed revolt against Darwinism

Now we may be seeing something similar in biological evolution.  A website titled ‘A Scientific Dissent from Darwinism’  (www.dissentfromdarwin.org/) has a list of about 900 names of scientists who question whether the small changes that we do observe  from  mutations and natural selection operating on the existing genetic information in living organisms, can be extrapolated to explain all the complexity of life. In other words, how can it explain molecules-to-man evolution?

We are skeptical of claims for the ability of random mutation and natural selection to account for the complexity of life. Careful examination of the evidence for Darwinian theory should be encouraged.

In the universities, certainly those that I know and have worked in, neo-Darwinism is accepted as fact. Who are these scientists to question that supposed fact?

I don’t know what scientific or worldview position these scientists hold, or what their faith or belief systems are, but quite clearly not all are biblical creationists. And just as clearly, there is a groundswell against the idea of the ‘pond-scum to man, all by itself’ type of evolution, against the notion often labelled as the General Theory of Evolution, and particularly the mechanism of neo-Darwinism.

(Darwinism is the speculation promoted by Charles Darwin that all life arose from a single-celled ancestor—which he later proposed may have come  naturally from some ‘warm pond’—via naturally occurring variations filtered by natural selection. Since then, the mechanism has been refined, hence neo- = ‘new’ Darwinism. It is now taught that random mutations (DNA copying mistakes, of which Darwin was unaware) are the primary source of the variation from which natural selection then chooses. Mutations are thus ultimately the only explanation for all of the new, functional information which has to have arisen for microbes to become people).

Darwinian evolution also requires lots of deep time. That is a belief many of these dissidents likely hold to. We know that one of them does; Dr James Tour, a professing Christian and prominent chemist, who was recognized this year as one of the 50 most influential scientists in the world.2  He does not believe in the 6-day Creation account, the narrative history of the book of Genesis. He believes in long ages, an old earth and accepts the dating methods. He says it is because (my paraphrase) he cannot understand how God could have meant 6 ordinary days if He did not create the sun until Day 4, because there would be no sun to measure off the first 3 days.3  Thus in this area, he has rejected the authority of Scripture, which Jesus Himself believed and quoted from. Like so many, Tour has allowed human opinion to re-interpret Scripture for him. In this case, it is particularly sad, since it is actually quite simple to have evening and morning before the sun; and in fact it is even a further testimony to the veracity of the text, see How could the days of Genesis 1 be literal if the Sun wasn’t created until the fourth day?

But what is interesting is that he does confirm that most scientists do not understand how evolution could explain the existence of life nor its complexity (emphases added).2

“Let me tell you what goes on in the back rooms of science—with National Academy members, with Nobel Prize winners,” Tour stated. “I have sat with them, and when I get them alone, not in public—because it’s a scary thing, if you say what I just said—I say, ‘Do you understand all of this, where all of this came from, and how this happens?’”

The answer he inevitably receives, Tour explained, is: “no.”

“Every time that I have sat with people who are synthetic chemists, who understand this, they go, ‘Uh-uh. Nope.’” Tour said. “And if they’re afraid to say ‘yes,’ they say nothing. They just stare at me, because they can’t sincerely do it.”

If evolution cannot account for life’s existence, then how did life originate? Tour is right when he says the most reasonable answer is simple.

“I believe fundamentally that God created us all,” he told the Houston Chronicle.

2 replies on “The revolt against Darwinism”

This is Josh from Lebanon. Thank you for your articles that you are posting on your website and creation.com. I have been reading them constantly for quite a while. My story is that a couple of years ago while doing my freshman year I was helping the physics professor in organizing his files as since I was also doing student work in the university to cover up for my fees. I then had a debate with him about the big bang since I found out he had a lot of articles about them. He told me that it was a scientific fact and at that time I had no base in apologetics so my faith was really shaken. However by reading your articles recently that the big bang is based on unprovable assumptions and relies on fudge factors such as dark matter, dark energy and dark radiation I was strengthened. However my faith is still really shaky, and today I just randomly came across an article that signals for dark matter have been detected. This is the link http://www.space.com/27985-dark-matter-signal-sterile-neutrino.html. I’d really like to have your thoughts about that.

Josh, Firstly let me state that your faith should never rest on any man’s ability to explain anything in the world about anything. Romans 10:17 “So then faith cometh by hearing, and hearing by the word of God.” Your faith will be strengthened when you trust wholly in what God says in His Word. Trust it as authoritative. No matter what is thrown at you you can rest assure that God’s Word will always stand. Secondly, as you have already indicated, “… the big bang is based on unprovable assumptions …”. So no matter what is said in the media, this is always true. You must ask the question when you read an article like you have mentioned, “What are the unstated assumptions?” In regards to the article itself, to have discovered X-ray emission from the intergalactic medium and then say that is what they expected, is not exactly honest. The dark matter they need in galaxies should mostly be in a halo surrounding the galaxies not in the centre; the opposite of what is stated in the article. This is, in fact, a problem with the dark matter paradigm. Matter tends to gravitate to the point of largest gravitational potential, like into the bottom of a well, at the centre of galaxies, but dark matter is needed in a spherically symmetric halo surrounding the galaxies to explain their anomalous rotation curves. They also state that the X-ray emission could be from the decay of some unknown dark matter particles. This has been said before: MISSING COSMIC SOURCES ELUDE ASTROPHYSICISTS. But to state categorically they have detected dark matter is begging the question, especially when they do not know what dark matter comprises. But it begs the question because they first assume it existence, then they state that that X-ray emission is what you would expect. But the logic is flawed because you would first have to eliminate all other possible explanations, especially if you are trying to prove it comes from a new particle like the ‘sterile neutrino’. See also A MISSING NEUTRINO—DARK RADIATION; DARK RADIATION IN BIG BANG COSMOLOGY; DARK MATTER AND THE STANDARD MODEL OF PARTICLE PHYSICS—A SEARCH IN THE ‘DARK’ and COSMIC MYTHOLOGY: EXPOSING THE BIG BANG AS PHILOSOPHY NOT SCIENCE