— how do they fit into a biblical creationist model?

Figure 1a: The quasar 3C 273, which resides in a giant elliptical galaxy in the constellation of Virgo. Credit: ESA/Hubble & NASA

Quasars are very high redshift astronomical objects with broad emission line (BEL) spectra. The latter is very different to that in the usual humdrum galaxies. This means the objects redshifts and BEL spectra can be used to identify them. And because of their high redshifts they are assumed to be very distant, very luminous active galaxies with super-massive black holes at their hearts, powering them to emit prodigious amounts of radiation over all wave-bands of the electromagnetic spectrum.

Figure 1b: Spectra of quasar 3C 273 compared to the star Vega. Spectral lines are shifted towards the red end of the spectrum, from which its distance is determined using the standard LCDM cosmology.

Most of the high redshift objects in the universe are quasars. The redshifts of galaxies and quasars when interpreted within big bang cosmology—the greater the redshift the greater the distance—means that the most distant objects are seen at a time when the Universe was youngest.1

Following big bang thinking, quasars are then considered to be just galaxies in some early stage of development—back closer in time to the big bang—than the usual spiral and elliptical galaxies we might see with much lower redshifts. The quasar 3C 273, shown in Fig. 1a, the first to be identified (discovered in the early 1960s by astronomer Allan Sandage), has been shown to reside in a giant elliptical galaxy in the constellation of Virgo. According to standard cosmology its redshift puts it at a distance of 2.5 billion light-years from Earth.

According to the big bang theory, how long should a quasar remain in the form of a quasar before transitioning into a normal galaxy and how long should that transition take? Quite obviously the answer to that question depends on one having a correct understanding of what quasars actually are and an accurate model describing their evolution. It would be no underestimate to state that an accurate model for galaxy formation, let alone a transition from a quasar to a normal field galaxy, is far from being known. The formation of a galaxy alone requires the invoking of a very large dark matter content, and often ‘jumping over’ the important details of star formation just to obtain something that looks like a galaxy. This means that there are physical laws in this Universe that create barriers in computer simulations preventing the formation of stars and hence galaxies. It is these that must be ‘jumped over’ in order that the simulations may proceed.2

We can assume that quasars have masses comparable to that of most galaxies. From that is follows then that naturalistic changes—that is, uniformitarian changes—can be expected to be of the order of a billion years.3 Without any real model for the changes expected in quasars, it may not be too unreasonable to expect any changes in their luminosity to be over uniformitarian timescales, and fuelled by growth of their supermassive black-holes, as some propose.

By contrast, according to the Genesis 1 narrative, God took one 24-hour day to create all astronomical objects, therefore we expect at creation that the youngest sources (which could include quasars) have very quickly changing observable features, such as luminosity. Yet very rapid changes, even down to timescales of days and weeks, in the observed luminosity of quasars have been recorded.4,5 One suggestion is that those variations are caused by microlensing6 and another is obscuration by dust but these mechansims are considered to be too long.7 Another is the rapid consumption of a passing star or gas and dust by the central supermassive black hole. Such proposals are offered because changes on such short timescales are not expected from the growth of the alleged supermassive black-holes at the heart of the quasars.

Now we read in an online news report8 that astronomers think that they have detected a dozen quasars in a disappearing act—the so-called “changing-look quasars.” Or they have been caught transitioning into their quiescent and dimmer counterparts—galaxies with starving black holes at their cores. This fact has left astronomers asking whether these objects are shutting down permanently or simply flickering out for the time being.

Last year Stephanie LaMassa from NASA Goddard Space Flight Center (then at Yale University) discovered the greatest change in luminosity ever detected in a quasar. She was digging through data from the Sloan Digital Sky Survey when she found that a quasar had dimmed in brightness by a factor of six in just 10 years. Its spectrum changed, too, from that of a classic quasar to a regular galaxy.8 (my emphasis added) 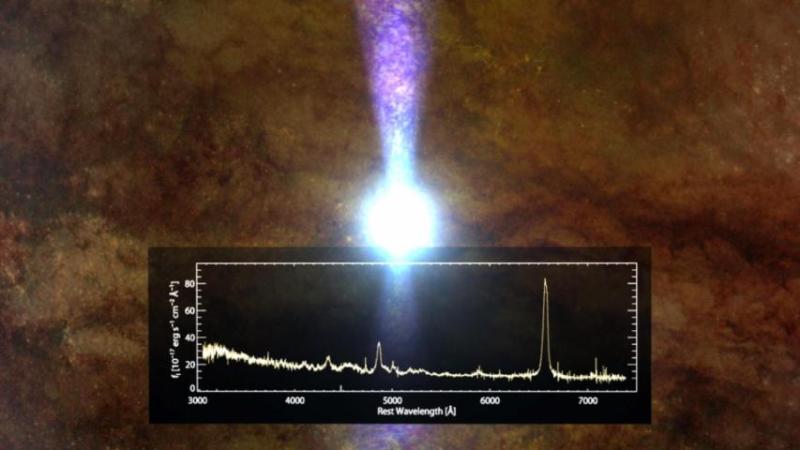 Figure 2: The image shows an artist’s conception of the ‘changing-look quasar’ as is appeared in early 2015. The glowing blue region shows the last of the gas being swallowed by the central black hole as it shuts off. The spectrum is the previous one obtained by the SDSS in 2003. Credit: Dana Berry / SkyWorks Digital, Inc.; SDSS collaboration.

Because astronomers believe in the very long time scale big bang paradigm they are forced to suggest any rapid dimming in the luminosity of any quasar must be either a transient effect or the very rare chance of observing the fuel exhausted from a supermassive black hole.  One report states that,

“Astronomers can’t find any sign of the black hole at the center of the quasar SDSS J1011+5442, and they couldn’t be happier.”9

In the case of this quasar (see Fig. 2) it is alleged that,

“… over the past ten years, it appears to have swallowed all the gas in its vicinity. With the gas fallen into the black hole, astronomers from the Sloan Digital Sky Survey (SDSS) were unable to detect the spectroscopic signature of the quasar, which now appears as an otherwise normal galaxy.”9 (my emphasis added)

The dimming was very significant and now appears like a normal humdrum galaxy.

“The difference was stunning and unprecedented,” said John Ruan of the University of Washington, lead author of a related paper ….. “The hydrogen-alpha emission dropped by a factor of 50 in less than twelve years, and the quasar now looks like a normal galaxy.” The change was so great that throughout the SDSS collaboration and astronomy community, the quasar became known as a “changing-look quasar.”9 (my emphasis added)

However, one of the newly discovered rapidly dimming quasar did re-brighten.

“And one of the 12 newly discovered objects did not just disappear but reappear. Krolik thinks that this lonely quasar blazed back into existence for the same reason that it flickered out: a variation in the gas and dust flowing onto the black hole.”8 (my emphasis added)

Certainly it is possible that the standard interpretation for quasars as AGNs10 powered by a supermassive black-hole is one possible explanation. The next step then will be to see if any of the other newly discovered dozen or so quasars re-brighten over the coming years.

A different explanation is one consistent with the work of the late Halton Arp11 where he suggested that quasars are born from the hearts of active parent galaxies. Over time, which he had no measure of, the ejected quasars transitioned from active highly luminous high redshift objects with BEL line spectra to the usual field galaxies with much lower redshifts and typical spectra.  This is illustrated in Fig. 3. Quasars are ejected in opposite directions from the nucleus of an active galaxy and over time they change their internal state including redshift, which decreases with finite discrete steps towards the commonly observed low redshift in field galaxies. Thus quasars and active galactic nuclei become normal galaxies.

Figure 3: Arp’s model of ejection of quasars from active parent galaxies and their eventual change to normal galaxies. Reproduced from Ref. 11 after Arp’s original in his book “Seeing Red.”

Apparently the idea that quasars or active galactic nuclei could become inactive is not controversial in the big bang universe. But the expected timescale is not less than tens of thousands of years. What LaMassa and her colleagues doubted was that a quasar could go from active to inactive in just 10 years.  But this is what these newly discovered rapidly dimming quasars have established. Rapid changes in the emission properties of the quasars, on timescales very much in line with a creation scenario, are observed. Even their spectra changing from that of a classic quasar to a regular galaxy.9

So this discovery is consistent with a creation scenario where we expect that processes in astronomical sources to be well less than seven thousand years. In the case of a creation process of galaxies formed from AGNs—the parent galaxies—and the ejected galaxies in the form of quasars, it would be essential that the quasars (at least some of them) have changed to normal humdrum galaxies in a period less than the time since Creation, that is less than about six thousand years.

However, it is also expected that many galaxies were created in their current forms, but if Arp’s evidence for quasars and active galactic nuclei transitioning to normal galaxies is correct, then this is what would be expected in the biblical creation model. Here we have an opportunity to see if these rapidly dimmed quasars, remain dim or re-brighten. Time will tell.