On metal abundances versus redshift in creationist cosmologies

Abstract: In creationist cosmologies do we expect to find a systematic trend of decreased metallicity in stars as a function of redshift?  Some may claim such a systematic decrease is a ‘lay down misere’1 in favour of the standard big bang model. Here I show that that is not the case, and when the assumptions are changed so does the outcome. Therefore such a claim does not automatically rule out creationist cosmologies with no such redshift dependence. First published in Journal of Creation 29(1) :3-5, April 2015. (This article is TECHNICAL.)

In astronomy, metallicity applies to all elements other than hydrogen and helium. The term ‘metal’ in astronomy describes all elements heavier than helium.2,3 A systematic trend of weighted mean metallicity as a function of look-back time in the Universe is sometimes shown in support of the standard big bang model.4 Though stated some find that this trend is not always so well supported by the observational data.5

Does this rule out certain creationist cosmologies? Take for example, Lisle’s Anisotropic Synchrony Convention (ASC) model,6 which essentially describes all galaxies with the same youthful age of about 6000 years but includes the notion of a mature creation. According to Lisle no ages of any structures in the universe should be greater than 6000 years, therefore based on evolutionary assumptions, if some object appears older due to so-called maturity, i.e. a fully formed galaxy, then that is in-built maturity that was from the creation.7

And what would you expect from the time dilation cosmologies of Hartnett8 and Humphreys9?  In those models the solar system is young, not billions of years old, but they have reasonable amounts of cosmic time that may be hundreds of millions of Earth years during creation Day 4.

So what do we expect to see in the cosmos?

In the standard big bang cosmology metallicity should decrease with distance from Earth because of several assumptions. These include the assumption that distance in the universe means longer travel times, hence we are looking back at sources when they were younger. Hence following this is the assumption that younger galaxies comprise more younger stars than older galaxies do and younger stars generally comprise less metals. Therefore at greater redshifts we should observe more metal poor galaxies.

But how much credibility do we give to these types of measurements? For example, Fig. 11 of Som et al. (2013),10 reproduced here as Fig. 1. Can we accept that those data are correctly interpreted from the astronomical observations? 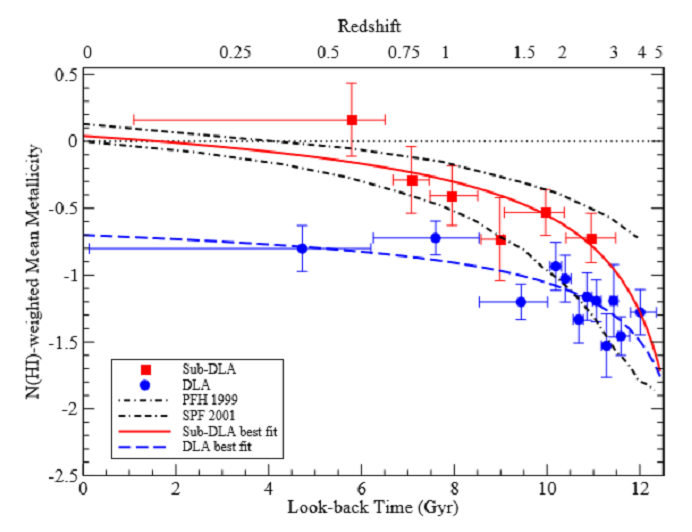 Figure 1. N(H I) column density weighted mean metallicity vs redshift and alleged look-back time (in Gyr) for two types of galaxies, one metal rich (Sub DLA’s) and the other metal deficient, (DLA’s). Zero metallicity (logarithmic scale) is that of the Sun.10 Formally, log N(H I) is estimated from ratios of species X/Y in the source compared to that of the sun. For example, log (NFe/NH)(star) – log (NFe/NH)sun.

In a creation model I have written of a scenario with God creating from the beginning of Day 4 to the end of Day 4 but creation processes occurring throughout Day 4 and distributed spatially throughout the universe.11 So we should not expect such a simple trend line as that exhibited in Fig.1. See Fig. 1 of Ref. 11, reproduced here as Fig. 2.

As mentioned in the latter, there would be expected both mature and immature galaxies at all redshifts. Redshift may in some cases correlate with distance but not necessarily so.  Hence in scenario I suggested there may be a weak trend but you would need to look at a lot of galaxies to determine if that is so. You would also have to make some important assumptions about metallicity and how it develops over the lifetime of the galaxy or quasar in question. You would also need to understand where quasars fit in as astronomical objects.12,13

And according to the Hubble Deep Field observations, galaxy morphology is very mixed at extremely high redshift, not a simple pattern of the more distant the more immature (and hence less metals). Also very few galaxies (apart from quasars) have had their metallicity measured and the Som et al.’s paper relies on relatively few quasar-backlit absorption clouds for their trend line. See Fig. 1.

Figure 2. A simplified schematic representing some key features of my creation model timeline of Day 4. Distance is in Mpc on a base 10 logarithmic scale and time is in hours on an approximately linear scale. The objects represent ejection episodes where a quasar is ejected from a parent galaxy. The quasar subsequently evolves into a galaxy over about 300 million astronomical years, which is about half an hour or 2% of Day 4. The lengths of the arrows are exaggerated and should be 0.5 hours (by Earth clocks) long. Millions of such episodes occurred during Day 4.

In more recent developments both Humphreys and myself have started to look at models where there is no cosmological redshift, based on the notion that the universe is not expanding. But this idea does not necessarily mean that redshift should not vary with distance nor does it rule out a metallicity-redshift dependence per se.

Even if we could disprove categorically Hubble expansion of the universe, a Hubble-type law relating redshift to distance in a static universe is possible. One researcher has now proposed over 59 possible redshift mechanisms and most do not involve an expanding universe.14

Now there may well be a metallicity dependence on distance, but let’s now focus closely on what I have proposed. I believe the observations of Halton Arp and others suggest to us a possible creation scenario that was ongoing during Day 4 of Creation week and that all astrophysical objects outside 6000 light-years distance from the solar system are a result of God’s creative hands (Psalms 8:3, Psalms 19:1).15 I have stated this in various papers.11,16,17 This may or may not mean we directly observe events within Creation Day 4. If not, we observe events only shortly after the close of Creation Day 4 and Creation week.

“The standard model posits that the Lyα Forest is generated en route as radiation from a quasar passes through intervening galaxies leading to absorption at redshifts lower than the emission redshift of the quasar. The test of the theory comes from the redshifts distributed en route, which should match the distribution of intervening structures. McDonald et al. (2006) have recently conducted a detailed analysis of a large sample of high-redshift SDSS quasar spectra. They started from the raw spectral data in order to closely monitor sources of contamination not previously considered, the ultimate result being not only in support of the standard model of cosmology, but also useful in producing better models of the intervening structures. This has since been confirmed at high significance by Slosar et al. (2011).”

This is the standard model approach and it involve standard model assumptions. The primary one is that quasars are at their redshift distances, and that they are the most distant objects in the universe. But work by Halton Arp, Jayant Narlikar, Geoffrey and Margaret Burbidge and several others indicates otherwise.19 They proposed that quasars are the embryonic galaxies, born with some intrinsic redshift (not related to distance), ejected from the hearts of parent galaxies.

“On the other hand, the intrinsic redshift hypothesis posits that the Lyα Forest comes from absorption in the quasar itself, presenting the question of how the forest arises. The variable mass hypothesis (Narlikar & Das 1980) would predict lower particle masses at younger age and therefore higher redshifts. If one is arguing for periodic (quantized) redshifts, then one would expect that after transforming to the rest frame of the host galaxy redshifts that the absorption line redshifts should show up at Karlsson values. This idea can be tested with the large databases available now, such as our investigation of the 2dF data.”18

“One then argues that a galaxy has multiple creation epochs and when light from a created quasar comes to the observer, it passes through clouds of matter created earlier than the quasar, so as to have lower redshift than the quasar, thus producing absorption redshifts. So, one testable prediction that can distinguish the Standard Model from our hypothesis is the distribution of absorption features in the Lyα Forest. In contrast to the Standard Model, our hypothesis predicts that absorption features will be distributed at Karlsson values. We propose that detailed observations and investigations could be made of the galaxy–quasar systems identified by our detection algorithm, using quasars at higher redshift that display the Lyα Forest, to ascertain if the redshifts of quasar absorption features are consistent with Karlsson redshifts, thus categorically distinguishing our hypothesis from the Standard Model.”18 (emphasis added)

In other words it does not follow necessarily that quasar redshifts indicate distance and hence time according to the big bang theory.

“If quasars are physically associated with a parent galaxy, the redshift of each quasar must be transformed to the reference frame of the putative parent as per Narlikar & Arp (1993) using

The transformed redshift, z0, of the candidate companion object is then hypothesized to be associated with the closest Karlsson redshift, zK, so that the redshift velocity, zv—the putative velocity of ejection away from the parent object—can be obtained from the formula (Narlikar & Arp 1993)

For example, let us assume that these absorption features have intrinsic redshifts and let us use three examples from Som et al.10 We don’t know the redshift zP of any putative parent galaxy that may have ejected the material, so we assume zp = 0 for the moment.  Then only Eq. (2) concerns us to transform the cloud into the reference frame of the unknown parent galaxy. We assume the features are associated with the absorbing cloud with intrinsic redshifts as zK = 1.410 (as per Karlsson) for the absorber zabs = 1.518 and zK = 1.960 for those with zabs = 2.082 and zabs = 2.139.  From this we get:

This implies zv < 0.045, 0.041 and 0.06 since we have not transformed into the reference frame of the original parent galaxy. And if the velocity of ejection (zv) was zero these redshifts would represent that of the parent galaxies of zp = 0.045, 0.041 and 0.060, respectively. The latter are the only possible Hubble law distance related redshifts, under the Arp model. We would in reality expect zp to be smaller than these allowing for a small ejection velocity component, zv ~ 0.01.

The point is this. The clouds have large intrinsic, non-distance related redshifts. Hence the calculations of metallicity verses distance (from redshifts) would need to be totally reassessed. And the trend would be most definitely lost, if it existed before, because there is no direct association of the intrinsic redshift of a quasar or a cloud with its parent galaxy redshift. Even in the three examples shown here there is no correspondence between zabs and zp from these calculations.

Therefore a lot more needs to be investigated before one can truly say that a systematic trend in metallicity with a Hubble-law distance-related redshift exists. In fact, because this alternate interpretation of the same observational data, results from a different underlying cause one may never be able to definitely say what the truth is, this side of heaven.

2 thoughts on “On metal abundances versus redshift in creationist cosmologies”